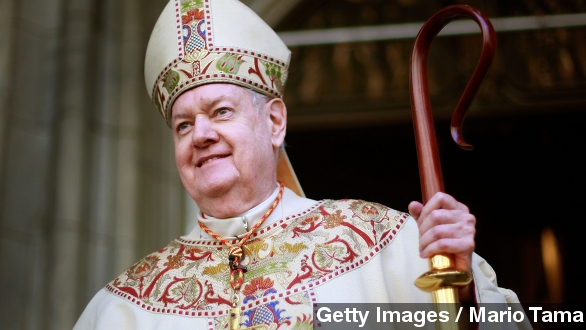 WNBC reports a spokesman for the Archdiocese said Egan didn't show signs of illness, noting that he seemed fine around lunchtime and was even eating — adding to the shock of his death.

Egan was appointed Archbishop of New York in 2000 by Pope John Paul II. A year later, he became a cardinal.

Egan served as archbishop for nine years, retiring in 2009 at 77 years old. During his time as archbishop, he became known for overseeing a wide financial overhaul.

When he was chosen for the job, Egan succeeded Cardinal John O'Connor, who left behind a massive $20 million annual deficit. Egan made unpopular decisions to eliminate that debt, but did so successfully.

Egan was also present during the 9/11 attacks — just one year after being appointed archbishop of New York.

"Fear is not part of our experience today," he said.

"He helped console New York, the nation for that matter, after the attacks of 9/11. The cardinal rushed to the World Trade Centers site, spent several days anointing the dead and handing out rosaries," reports Fox News.

It read in part: "Join me, please, in thanking God for his life, especially his generous and faithful priesthood. ... My sympathy to his natural family, who will grieve for their uncle, and to you, his spiritual family here in the Archdiocese of New York."

Funeral arrangements have yet to be released. Egan would have been 83 next month.