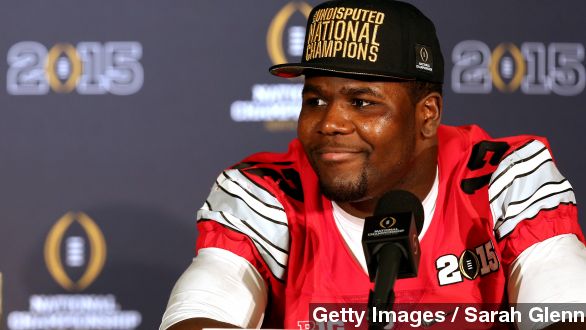 "My decision was very first simple. After talking it over with my family and my friends, my coaching staff, I'm gonna return next year for school," Ohio State University quarterback Cardale Jones said.

The Buckeyes third-string quarterback made his decision after leading the team to its first national championship since 2002 in just his third collegiate start at QB.

"The NFL after three games was really out of the question for me," Jones said.

Jones is also not really an outliner with his decision. According to ESPN, "this is the sixth time in the last seven seasons that the QB that won the national title returned the next season."

And Jones, who was redshirt sophomore, certainly got the media stirring right before his announcement.

He punched in this suspicious tweet announcing an upcoming "life changing decision."

It lead many sports analysts to speculate he might enter the NFL draft.

But, it turns out, he says he's committed to finishing his education first.

"When I make that decision to play in the NFL, I want to be done with school," said Jones.

And that sentiment provoked a bit of skepticism.

In 2012, Jones reportedly posted this now-infamous, now-deleted tweet, obtained by Lost Lettermen. It reads: "Why should we have to go to class if we came here to play FOOTBALL, we ain't come to play SCHOOL, classes are POINTLESS."

But we're not going to harp on this too much. It is just one tweet after all — made two years ago. Plus, Jones' supporters say Thursday's decision to stay at OSU could be seen as a sign of maturity.

As far as what he turned down, it's difficult to say. Business Insider says he would've likely fallen in a kind of draft purgatory.

Some ESPN projections says his value could've been up to $4 million if picked in the first round, but that number would've dropped substantially if he wouldn't have been picked up until the fourth round.

Now that Jones is staying, OSU has a dilemma of its own: what's going to happen to the two QBs Jones filled in for; namely: Braxton Miller?

Miller was the 2012 and 2013 Big Ten Offensive Player of the Year before injuries sidelined him in the 2014 season.

And a writer for Bleacher Report argues his Heisman-caliber talents are too good to be a backup at Ohio State and suggested he transfer to another school.

As for Jones, it's hard to argue against him getting the starting nod. He's come on strong with a 3-0 record in his first three starts at QB. Two of those three games included the Big Ten Championship and the National Championship.