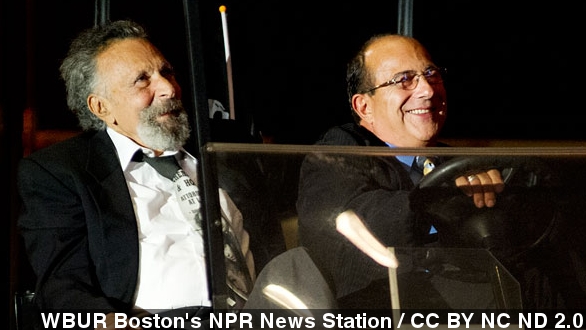 Tom Magliozzi, one half of "Click and Clack," the hosts of NPR's "Car Talk," passed away Monday of complications from Alzheimer's disease. He was 77.

Magliozzi, shown here on the left, hosted the show with his younger brother, Ray. The show ran on NPR for more than 25 years and became more well-known for the on-air antics of its hosts than for its discussion of automobiles. (Video via Martha Stewart)

Tom Magliozzi: "This is the only theory of which I'm sure: I don't know if the Earth goes around the sun or vice versa, I don't know about electromagnetism, but I know it never pays to buy a new car."

Tom and Ray stumbled into the radio business by accident. Tom was asked to speak during a local WBUR broadcast about cars in 1977 and was a hit. That station asked him back again and that time he brought Ray. Their careers in talk radio took off from there.

A longtime producer of the show told NPR, "His laugh is the working definition of infectious laughter. ... I'd just hear his laughter and then there'd be more of it, and people would sort of gather around him. He was just kind of a magnet."

For a while, the brothers owned a car repair shop in in their hometown of East Cambridge, Massachusetts. They liked to pretend they were just regular mechanics, but both brothers had degrees from MIT and Tom even received a doctorate from Boston University.

In a statement on the Car Talk website, Ray said of his older brother, "We can be happy that he lived the life he wanted to live; goofing off a lot, talking to you guys every week and primarily, laughing his ass off."

The brothers retired in 2012, but NPR still airs old episodes of the show. Ray asked that instead of flowers, people wanting to make donations should give to their favorite public radio station in Tom's memory.