Car Bombings Show ISIS Is Still A Threat Across Iraq 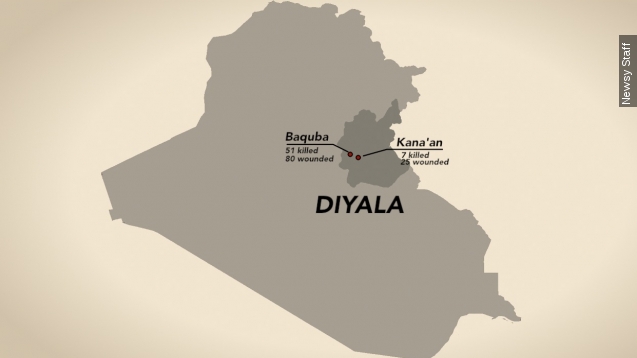 By Matt Picht
August 10, 2015
ISIS says it orchestrated a pair of bombings in the Iraqi province of Diyala, despite being driven from the region in January.
SHOW TRANSCRIPT

The terrorist group ISIS has claimed responsibility for a pair of bombings that killed at least 58 people and wounded dozens more in Iraq's Diyala province Monday.

A car bomb detonated in the marketplace of a town near the provincial capital, killing 51 people and wounding 80 more, according to police. A suicide bombing in another nearby village killed seven more people and left 25 injured.

ISIS claims the attacks were aimed at Shiite Muslims in the region. They're also a reminder of the group's influence in the country, even in areas formally controlled by the Iraqi government.

ISIS overran Diyala during its initial push to control large swaths of Iraq last June. After months of fighting, Iraqi forces said in January they had driven ISIS out of most of Diyala with the help of Shiite militias. (Video via Al Jazeera)

But while ISIS no longer controls the region, it's still able to orchestrate devastating terrorist attacks. Last month, a massive car bombing in the province killed approximately 130 people. ISIS took responsibility for that attack as well. (Video via Al Arabiya)

Baghdad vowed to increase security in Diyala after that bombing, but currently the government is focusing most of its attention on combating ISIS in the western province of Anbar.