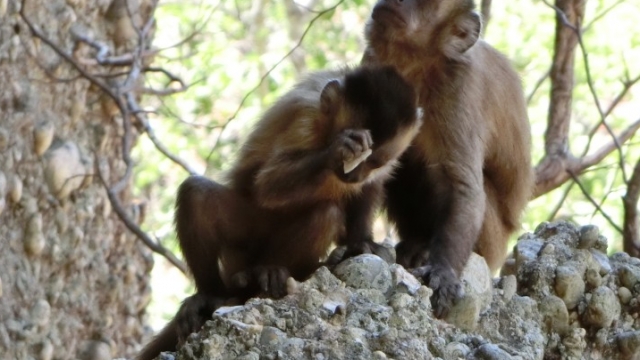 SMS
Capuchins Put A Monkey Wrench In Our Knowledge Of Early Human Tool Use
By Evan Thomas
By Evan Thomas
October 19, 2016
Monkeys are messing with where we think early humans created tools.
SHOW TRANSCRIPT

Every time scientists found flakes of chipped stone in the fossil record, it was taken as a proud sign of humanity's genius. Now some monkeys are screwing all of that up.

Humanity's early ancestors — like Homo erectus — used sharp rocks as tools, and they sharpened those rocks by chipping away at them until there was an edge. That left piles of stone flakes, so whenever scientists found those remnants at ancient sites, they assumed it was someone making tools.

SEE MORE: Research Says Complex Tools Might Not Be 'Our Thing' Anymore

But a new study finds Capuchin monkeys also bang rocks together to break them apart. Researchers think they're trying to get lichens and minerals out of the fragments to supplement their diets.

And in the process, they make stone flakes that look just like the ones that tools create. We can't really tell them apart. A monkey behavior overlaps with something we thought was unique to early humans.

The monkeys don't use the sharp-edged fragments for anything, so it's not a sign of human-like intelligence or complex tool use. But it means rock flakes aren't enough evidence to point to early humans making tools anymore, so any site where these flakes showed up might have to be re-evaluated.

The researchers who watched the monkeys say we need to look for more evidence nearby — like something the tools were later used on.