Captain Swims For His Life After Shark Capsizes Boat 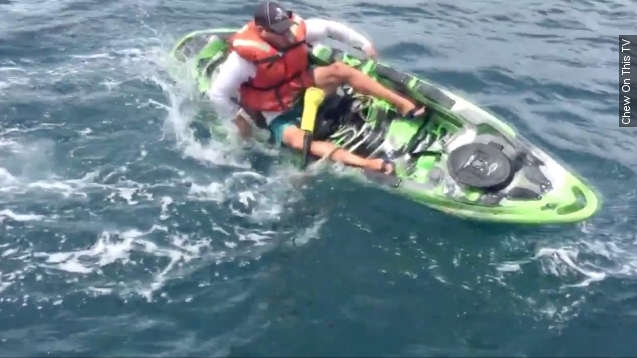 This video starts out normally enough — a guy is fishing in Florida. But then, that guy, captain Ben Chancey, hooked a shark. And it decided it wasn't going in the boat without a fight.

"He's right underneath of you, oh my God," said a man off-camera.

The definition of foolish is "without good sense" or "unwise." And what you're about to see may fall under that category.

You can see in this YouTube channel fishing show Chew On This TV that captain Ben goes back out into the water to wrangle that shark. So, foolish or brave? Either way, the video's gotten more than 1.9 million views.

A writer for BroBible, who grew up in Florida and has been shark fishing, said the footage was pretty unbelievable.

Honestly, the reactions from the folks over at Right This Minute sum up ours:

"Ohhh my gosh, that's moving fast!" one reporter for Right this Minute said.

In the end, the hook came out, and the shark swam away. So, a win for the shark, but also a win for captain Ben since he got a nice viral video out of it.

This video includes footage from Chew On This TV and music from Kevin MacLeod / CC BY 3.0. You can also find Chew On This on Google+.