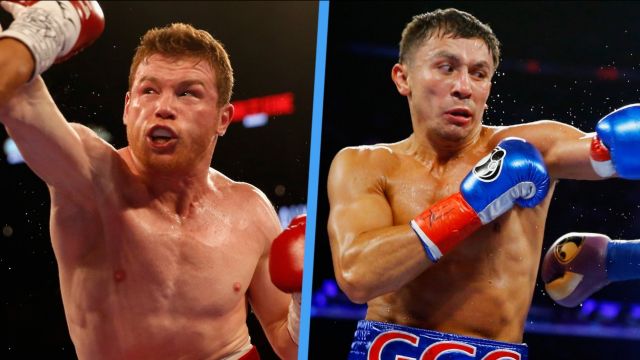 SMS
Canelo Alvarez And Triple G Finally Agree To Fight — In Fall 2017
By Matt Moreno
By Matt Moreno
June 23, 2016
It's the most anticipated matchup since the Floyd Mayweather and Manny Pacquiao bout, but reports say no official contracts have been signed.
SHOW TRANSCRIPT

It appears boxing fans are finally going to get the fight they've long been clamoring for.

According to reports from ESPN and the Los Angeles Times, Canelo Alvarez and Gennady Golovkin have reportedly verbally agreed to fight each other.

It's the most anticipated matchup since Floyd Mayweather versus Manny Pacquiao.

Still, boxing fans will have to wait a bit to see this one if it does, in fact, go down. The reports say fall 2017 is the earliest this fight will happen.

Greg Loeffler, Golovkin's promoter, told ESPN, "It's Gennady's priority to make the Canelo fight as soon as possible, but Golden Boy felt next year would make the most sense on the promotional side and with the weight as well."

Weight has been one of the bigger issues for the fight, but it appears that's now been settled. Alvarez is expected to fight at 154 pounds against a to-be-decided opponent Sept. 17 before he and Triple G meet at 160 pounds.

The matchup has been brewing for a while now. After Alvarez's KO of Amir Khan in May, he motioned to Triple G, who was sitting ringside, to get in the ring right then and there. Not surprising, the invitation was declined.

And to be fair, the Mayweather-Pacquiao fight everyone wanted took about five years to actually get off the ground.

So far, there is reportedly no binding contract for the fight to happen, but we'll keep an eye on it.