Can U.K.'s Cybersecurity Push Save Cameron From Prank Calls? 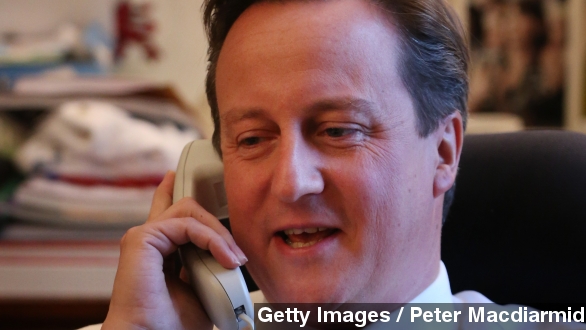 The secretive British surveillance agency known as GCHQ has developed a reputation for their digital prowess, ever since the Edward Snowden leaks revealed just how wide-ranging and penetrating their spying capabilities are.

So it's both comforting and terrifying to know that for all their high-tech acumen, Britain's top spies can be taken in by a simple phone call.

The second hoax could have been a bit more serious. Someone managed to get through to U.K. Prime Minister David Cameron by pretending to be Hannigan. Cameron's office says no sensitive information was disclosed during the call, which was, quote, "quite brief."

Prime Ministers have been punked by phone in the past; the BBC refers back to 1998, when a radio DJ pretending to be William Hague managed to have a brief conversation about Cher with then-PM Tony Blair

And although it's easy to shrug off this latest incident as a harmless prank, it does raise some questions about security.

Thanks to some high-profile hacks and the spread of Islamic extremism on the Internet, cybersecurity is near the top of the agenda for both the U.K. and the U.S. right now. Both governments have unveiled plans to strengthen their digital infrastructure to guard against such attacks.

But if GCHQ's security can be breached by a sufficiently convincing phone call, those measures might need to worry about human error as well as digital attacks.

Both GCHQ and the prime minister's office are reviewing their procedures to minimize the chances of this happening again, once they find a way to stop their refrigerator from running and let Prince Albert out of his can.