Can 'The Interview' Live Up To The Hype? 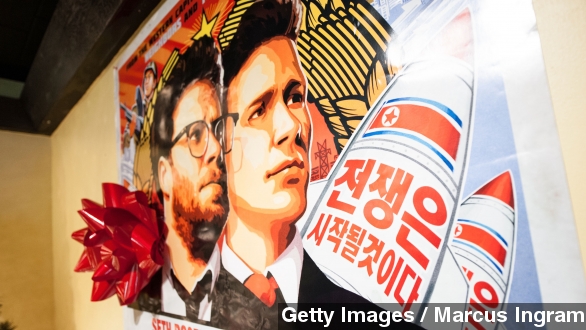 A massive hack, terrorist threats and widespread fear all led to Sony's movie "The Interview" being pulled from major theaters.

Caplan said, "Kim Jon Un's people believe anything he tells them, including he can speak to dolphins or doesn't urinate or defecate."

Franco said, "But he does talk to dolphins?"

All the press surrounding the film created a lot of hype and might have added to viewer expectations. But now that it's been released online and in select theaters, can we say the comedy actually lived up to the hype? In short, no.

The reviews are in and while there is some praise, for the most part it's not pretty.

The U.K.'s Express calls it "A seriously bad movie," pointing to an overarching conclusion among critics that it's just not funny.

While a writer for The Verge is, well, a bit more blunt, "there is nothing revolutionary about the screening and viewing of The Interview. ... The Interview is a bad movie that trivializes one of the worst ongoing human rights violations on our planet right now, and its distribution ... will change absolutely nothing."

But let's be real here. The movie stars Seth Rogan and James Franco — and neither are known for their political commentary.

"I got my dark tanning oil, lay out by the pool. This is the American dream y'all," James Franco in "Spring Breakers."

Did we really expect "The Interview" to be some life-altering, eye-opening film meant to expose the horrors of the Hermit Kingdom?

Variety doesn't defend the film — far from it — but the outlet does make a good point. "The hype around 'The Interview' suggests a take-no-prisoners dirty bomb of a movie." Something it probably was never even meant to be.

There is one person who is reportedly happy the movie opened,"I'm glad it's being released. Merry Christmas everybody." said President Obama to CNN.

In addition to those select theaters, Sony is now streaming the film on Google Play, YouTube and Xbox.