Can The G20 Stay Relevant? 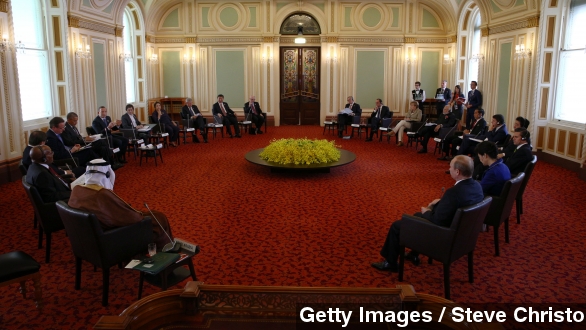 SMS
Can The G20 Stay Relevant?
By Matt Picht
By Matt Picht
November 15, 2014
World leaders are gathered in Brisbane, Australia for the G20 summit, but the group's effectiveness is again getting called into question.
SHOW TRANSCRIPT

AUSTRALIAN PRIME MINISTER TONY ABBOTT: "It's the most important meeting ever held in Australia. It won't be a talkfest."

The annual G20 summit is taking place in Brisbane this weekend, and world leaders from 19 nations and the European Union gather to discuss major economic issues.

And there’ll probably be some time on the sidelines devoted to recent international crises like the Ebola epidemic, the rise of ISIS in Iraq and Syria, and the ongoing conflict in Ukraine.

But world leaders will also have to wrestle with another issue: what’s the G20 good for these days? Can it be an efficient and relevant shaper of world economic policy, or will it just devolve into Abbott’s “talkfest?”

Let’s start with the basics: the G20, or group of 20, is a loose forum of 20 major economies from around the globe. It’s meant to be more inclusive than groups like the G7, but still small and nimble enough to effectively coordinate.

The group was formally created in 1999, but the annual summits of world leaders didn't start until 2008, during the global financial crisis.

And in retrospect, most economists agree the G20 was up to the task of managing that crisis — the group was responsible for coordinating economic stimuli, reorganizing and reforming international finance regulations, and generally making everyone feel like someone had a handle on the situation.

But without a massive crisis to rally around, the group’s sense of coherence has fallen apart. Now, everyone's arriving at the summit with a separate agenda: (Video via ODN)

The group’s also facing a lot of criticism for not being representative enough. Its member states cover ⅔ of the world’s population and account for over 85 percent of global GDP. But if you’re one of the 174 countries that can only hope for an occasional invite, the G20 can feel pretty insular.

And as one expert told The Guardian, without a motivating mission like the financial crisis, the G20 risks losing relevance and becoming “international space junk, rolling around, sucking up resources and time.”

"The whole thing costs a tremendous amount of money, requires massive security, and is of dubious benefit. … But it’s still a nice opportunity for world leaders to get their pictures taken together."

But a writer for the Council on Foreign Relations notes, the G20 will still retain its international clout by virtue of necessity.

"The world is experiencing an unprecedented shift in global economic power. At such a fluid (and potentially volatile) moment, the world urgently needs a high-level steering group."

Or as the BBC more succinctly puts it, "If the G20 didn't exist, we’d probably have to invent it."