Can't Decide Where To Go For Grad School? These Rankings Could Help 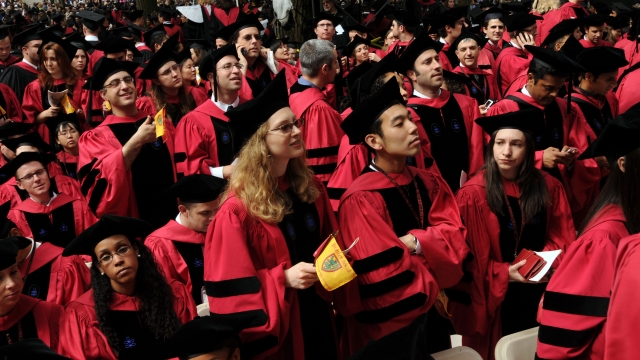 SMS
Can't Decide Where To Go For Grad School? These Rankings Could Help
By Matt Moreno
By Matt Moreno
March 16, 2016
U.S. News and World Report has released its rankings for the best graduate schools in the nation.
SHOW TRANSCRIPT

Can't decide where to go for grad school? Maybe the 2017 U.S. News and World Report rankings can help.

In business, Harvard Business School knocked off Stanford University's Graduate School of Business for first place. Stanford and the University of Chicago tied for second.

2. (tie) Booth School of Business at the University of Chicago

For law school, Yale once again reigned supreme, with Harvard and Stanford tying for the second spot.

For engineers, the Massachusetts Institute of Technology grabbed first. Stanford and UC Berkeley settled in at No. 2 and No. 3, respectively.

For the full rankings, check out the U.S. News and World Report website.

This video includes images from David Wilson / CC BY 2.0, callison-burch / CC BY 2.0 and Getty Images.