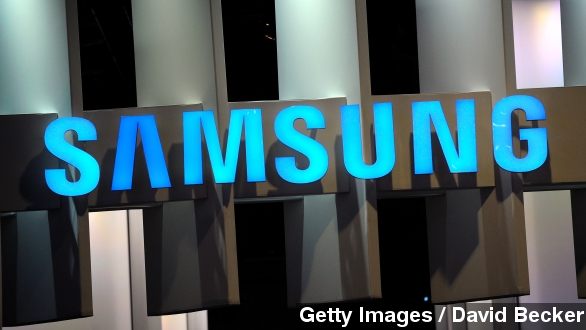 SMS
Can Samsung Pay Make Mobile Payments Catch On?
By Ben Lawson
By Ben Lawson
March 1, 2015
Samsung unveiled a mobile payment system that could have a wider reach than Apple Pay thanks to technology that mimics a credit card's magnetic strip.
SHOW TRANSCRIPT

2015 seems to be the year tech companies are determined to make mobile payments catch on in a big way.

The latest push comes from Samsung. The South Korean company unveiled its new Galaxy S6 smartphone Sunday and with it came the details for its upcoming mobile payment system, Samsung Pay.

The news that Samsung acquired mobile payments company LoopPay a few weeks ago made it clear the company was planning a big push for mobile payments sometime soon. But Sunday's news that the hardware to make LoopPay work is already built into the new devices shows that the two have been working closely for a while now.

The Galaxy S6 and S6 Edge go on sale in the U.S. April 10, but Samsung Pay won't roll out until this summer.

Samsung Pay will work much like Apple Pay. Although Apple's system only uses near-field communication chips, or NFC chips, to make transactions, Samsung will also use a system that essentially mimics the traditional magnetic stripe found on the back of credit cards.

It's that system that could give Samsung an edge over the competition — even over Apple, the current mobile payments leader.

There are still a lot of places where mobile payments using NFC chips won't work because the sales terminals lack the necessary hardware. Because Samsung's new system doesn't require retailers to purchase additional hardware, the company said it will work at about 90 percent of existing U.S. payment locations.

And because of the magnetic signal, retailers can't block Samsung Pay, like Wal-Mart did with Apple's system.

That might just be a temporary advantage. A MasterCard spokeswoman told Computerworld that the magnetic signal is merely a "bridge" until retailers fully adopt NFC terminals saying, "We do believe NFC is the wave of the future."

Samsung simplifying mobile payments for consumers could be a huge win, not just for Samsung but for the entire industry. It seems the technology is finally here. The big hurdle now is finding a way to make consumers care.