Can Russia's Janet Yellen Save A Tanking Economy? 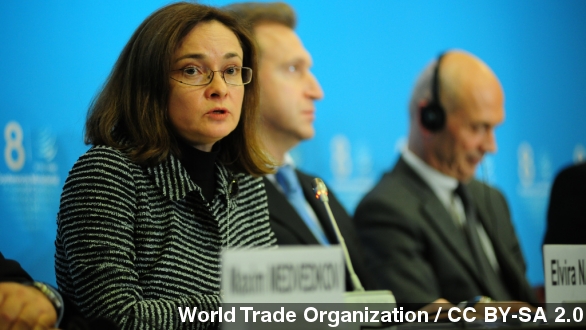 SMS
Can Russia's Janet Yellen Save A Tanking Economy?
By Bram Sable-Smith
By Bram Sable-Smith
November 16, 2014
Elvira Nabiullina and the Central Bank of Russia are battling an economy plagued by falling oil prices, Western sanctions and a weak ruble.
SHOW TRANSCRIPT

By most accounts, the U.S. economy is on the mend.

The Russian economy, on the other hand, not so much.

Elvira Nabiullina became the first woman to head the central bank of a G8 nation when she was appointed to the post in 2013, landing her a spot on Forbes' "100 Most Powerful Women" list.

But the economy Nabiullina runs is facing remarkable constraints.

About half of Russia's government revenues comes from oil, and the country's current budget was based on oil prices of 100 dollars per barrel. The country was forecast to have zero growth with oil at 95 dollars per barrel, and even that is far higher than oil's current price hovering near 85 dollars a barrel.

On top of that, Western countries have imposed sanctions on Russia over its involvement in Ukraine, restricting the ability of some of its major companies to raise capital.

And the ruble has plunged 30 percent against the dollar in the past three months, raising the projected inflation in the country up to 8 percent from the 4 percent target.

Nabiullina has taken a series of measures to counter the downward trends.

Next, after spending more than 70 billion dollars in reserves defending the ruble, Nabiullina's central bank announced it would allow the Russian currency to float freely, while also moving to limit speculation against the ruble.

And the central bank has even stepped up its purchasing of gold, the accumulation of gold being a guard against worst case scenarios like Russia is facing down.

And the actions seem to have made some gains, albeit modest.

As Bloomberg noted: "volatility is starting to fall and the premium for swapping rubles for dollars has dropped to a two-month-low...Following the longest run of weekly losses since 2005, the currency hasn't breached a record intraday low this week."

But that wasn't enough for the deputy of the Russian State Duma who called Nabiullina "the most expensive woman in the history of our country."

The outlook for the Russian economy remains bleak. Nabiullina has forecast zero growth and 8 percent inflation for Russia in 2015 and expects sanctions to last until 2017.