Can Rugby Star-Turned-49er Jarryd Hayne Make It In The NFL? 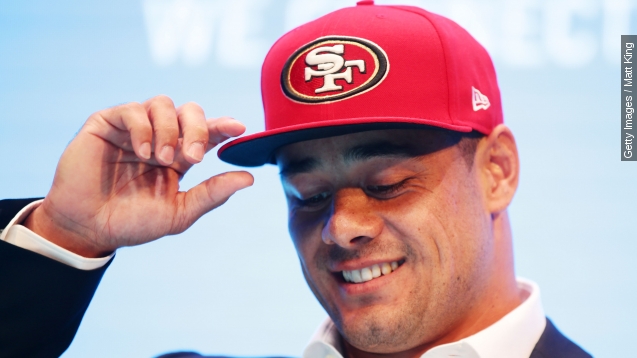 He's an undrafted rookie. He's only played two games of organized football in his life. And he's quickly becoming one of the most electrifying players in the NFL. People just can't stop talking about 49ers kick returner Jarryd Hayne.

His story sounds like something out of a movie. The Australian import dominated the National Rugby League, winning player of the year honors in 2009 and 2014. But he had his sights set on the NFL.

"We'd always wondered would I be able to make it. So it really got entrenched in my heart," Hayne told Peter King on Sports Illustrated's Monday Morning Quarterback blog.

It's pretty astounding to think someone would leave a league the season after winning MVP. It's even more incredible when you realize Hayne will likely make less than a tenth of what he would had he stayed with rugby. And he's not even guaranteed a spot on the team.

But he's certainly playing like he belongs. On Sunday's preseason matchup against the Cowboys, Hayne juked several defenders on some nifty punt returns. He averaged 28 yards per return, more than double last year's leader in that category.

He also performed well as a running back, rumbling for a 34-yard gain against the Cowboys, as well as a 53-yard pick up in his first-ever game of football against the Houston Texans.

But let's not get ahead of ourselves. 49ers head coach Jim Tomsula isn't ready to believe the hype about the man they call the Hayne Plane.

Tomsula told Fox Sports Hayne "absolutely has to battle to make the roster," and he still needs time to pick up the differences between football and rugby. But he's still excited to see how the Aussie all-star can transition to the gridiron.

"There's a lot of courage involved right there, or you're flat nuts, you know? Either way that could work for us," Tomsula said with a laugh.

It's also worth mentioning that all Hayne's snaps have come in the preseason, usually against back-up players.

And besides, what good is a football player that isn't even available in your fantasy league yet?

Jarryd Hayne is certainly a world class athlete and has the skills to be successful in the NFL, but he still has a long way to go before he can make an impact on Sundays. We'll have to wait until Sept. 5 to see if Hayne makes the final roster.