Will Obama's Carbon-Emissions Cuts Be As Strict As He Plans? 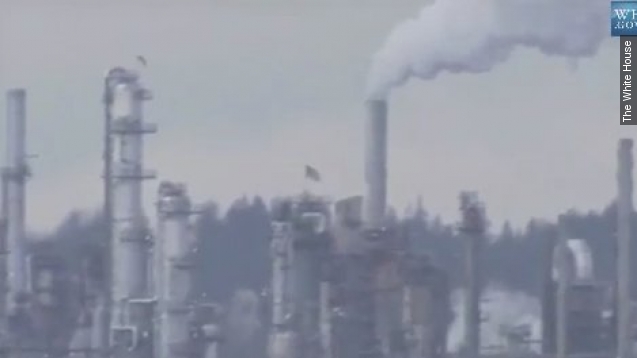 SMS
Will Obama's Carbon-Emissions Cuts Be As Strict As He Plans?
By Ryan Biek
By Ryan Biek
August 2, 2015
The White House's new sanctions against coal-fired power plants are the strictest yet. How have those kinds of sanctions fared in the past?
SHOW TRANSCRIPT

The White House says it'll release a new carbon emissions plan Monday, and it could be the strictest yet. (Video via The White House)

Coal-fired power plants are the main targets. Bloomberg reports about 40 percent of  U.S. electricity comes from coal-fueled power plants. And the Environmental Protection Agency says electricity accounts for about a third of greenhouse gas emissions.

Anonymous officials told The Washington Post the plan gives states 15 years to cut carbon dioxide emissions by a third of the levels in 2005.

President Obama said July 29 he'll veto any bill that goes against him, a position that'll likely be put to the test. The Guardian reports half a dozen states have said they'll challenge the EPA in court.

It doesn't mean Obama and the EPA aren't still hoping to get everyone on their side.  (Video via The White House)

The EPA is using the Clean Air Act from the 1970s to change the perception that environmental protection and economic growth are at odds. (Video via U.S. Environmental Protection Agency)

That act, which got stricter in the 1990s, targeted both power plant and motor vehicle emissions. According to a 2011 EPA study, the benefits from the 1990s amendments will exceed the costs 30-to-1 by the year 2020.

The agency says the law also saved the government money because less was spent on medical treatment for illnesses caused by pollution.

But other studies undercut those claims. For instance, a 2012 study from the National Bureau of Economic Research estimated the Clean Air Act led to an almost 5 percent drop in productivity and a nearly 9 percent reduction in national manufacturing profits from 1972 to 1993.

And this isn't the only case of cost-benefit analyses differing from the EPA's.

Just this June, the Supreme Court ruled against the limits the EPA recently placed on mercury and other toxic pollutants, saying because the agency didn't first do a cost-benefit analysis before regulating, it actually violated the Clean Air Act.

Both sides agreed the limits would cost the energy industry $9 billion annually. But while the EPA said the annual benefits were in the tens of billions each year, the court sided with industry groups' estimates that the benefits were a meager $6 million. (Video via GOP)

This could mean in the face of all the economic concerns, even President Obama's veto powers might not be enough to keep his new carbon emission plan as strict as he'd like. (Video via The White House)

This video includes images via Getty Images, joiseyshowaa / CC BY SA 2.0 and Cathy / CC BY NC 2.0.