Can Microsoft's HoloLens Headset Live Up To The Hype? 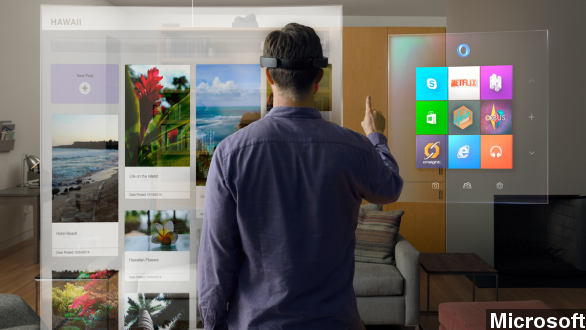 SMS
Can Microsoft's HoloLens Headset Live Up To The Hype?
By Mikah Sargent
By Mikah Sargent
January 22, 2015
Microsoft revealed its take on augmented reality devices, and it's called the HoloLens: a headset that lets users interact with holograms in 3D space.
SHOW TRANSCRIPT

Microsoft has finally revealed its answer to the virtual reality trend. It's called HoloLens, an augmented reality headset that projects holograms onto the physical world, allowing you to interact with virtual objects in 3D space.

We've got to say, based on the demos Microsoft showed on Wednesday, the device is very impressive.

And we're not alone in that judgement. Tech sites are describing HoloLens with words like "amazing," "incredibly cool" and "futuristic."

The headset is essentially a cross between the bulky, fully enclosed Oculus Rift and the lightweight, unobtrusive Google Glass headset.

But where Oculus Rift completely immerses the user in a virtual world and Google Glass just provides a tiny, semi-transparent overlay, HoloLens seems to find the sweet spot between the two. (Videos via Oculus, Google)

Glassholes are, of course, Google Glass users who make others uncomfortable with the device.
"Oh these? No. These don't have x-ray vision ... yet," said the Google Glass user. (Video via Mashable)

A writer for The Next Web called HoloLens "the kind of thing I could never have imagined Microsoft dreaming up."

And that sentiment is likely part of the reason Microsoft's HoloLens is making so many headlines. It's a refreshing bit of innovation from a company that's frankly been lacking in that department.

Still, Polygon has taken a soberer approach to the news, reminding us of Microsoft's last attempt at virtual technology: Kinect. (Video via Microsoft)
"The Kinect's long journey, and Microsoft's attempts to turn it into a mainstream product, came to an end when it was removed as a mandatory pack-in with the Xbox One hardware."

Microsoft will need to make HoloLens a much more compelling, functional and useful device than Kinect if it's going to be successful — especially given the size of that headset it's wanting people to strap to their head.