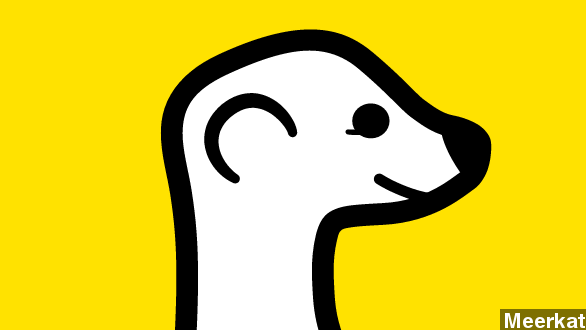 SMS
Can Livestream App Meerkat Be Successful Without Twitter?
By Ben Lawson
By Ben Lawson
March 14, 2015
Live video app Meerkat has seen a surge in popularity despite a setback from Twitter. Will it be able to maintain it's growth?
SHOW TRANSCRIPT

Just as social media app Meerkat was on the rise, Twitter dealt it a heavy blow by cutting its access to the social network.

Meerkat, a livestreaming video platform, has been getting a good amount of buzz over the last few weeks and even more so recently thanks to South by Southwest in Austin.

A huge part of the app's functionality was pulling in a person's follower lists from Twitter which creates a strong social group right when a person signs up.

Meerkat users can still posts links to video streams on Twitter but getting shut out of its social graph is a huge barrier for making Meerkat easy to use early on.

Twitter's motivation for the move seems pretty clear: the company just revealed that it bought out Periscope, a competing live streaming service, a few months ago.

But Twitter denying Meerkat access hasn't held the streaming service back too much... yet. The app's co-owner tweeted Saturday that the number of streams on the app doubled yesterday.

Meerkat has managed to get some big names to hop on board too. CNN had some fun with the app on the streets of Austin. PBS, CNBC and Nasdaq have all hoped on board as well.

Spotify's Daniel Ek gave a tour of the company's Stockholm office and Jared Leto streamed a chat with fans from Russia.

Meerkat is getting a lot of buzz at the moment but it's anyone's guess if the app will last. It's hard not to throw it in with apps like Yo, Ello and Draw Something that had a surge in popularity before fading away into the background.