Can Libya Carry Out Death Sentence Against Gadhafi's Son? 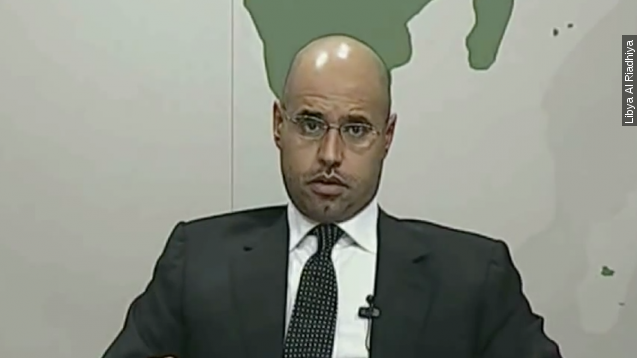 SMS
Can Libya Carry Out Death Sentence Against Gadhafi's Son?
By Jake Godin
By Jake Godin
July 28, 2015
Libya has sentenced Moammar Gadhafi's son to death in absentia, but will it be able to carry it out with the country's government so fragmented?
SHOW TRANSCRIPT

A court in Tripoli has sentenced the son of former Libyan dictator Moammar Gadhafi to death by firing squad. (Video via Libya Al Riadhiya)

But, seeing as how Saif al-Islam Gadhafi isn't in Tripoli and was tried in absentia — the court that sentenced him may have some trouble actually carrying out the sentence.

Saif has been held by a militia group based in the Libyan city of Zintan since he was caught fleeing the capital after the 2011 revolution.

Thirty-five others were tried on charges relating to the revolution and deaths of protestors.

According to the BBC, Saif will be able appeal his sentence.

Having issued a warrant for Saif's arrest back in 2011 for crimes against humanity, the International Criminal Court has demanded Libya cease its trial due to concerns over whether it'd be able to conduct it fairly.

Part of those concerns have to do with Libya's current civil war, which began in 2014. (Video via RT)

The country is split between two rival governments. One, which is internationally recognized as the legitimate government, is based in eastern Libya while an Islamist government controls parts of the west, including Tripoli.

Then there are Ansar al-Sharia and ISIS, both terrorist organizations. They're vying for control of parts of central Libya.

The fragile security situation has led to groups like Amnesty International and Human Rights Watch to condemn the trial and call for Libya to hand Saif over to the ICC.