Can Dzhokhar Tsarnaev Get A Fair Trial? 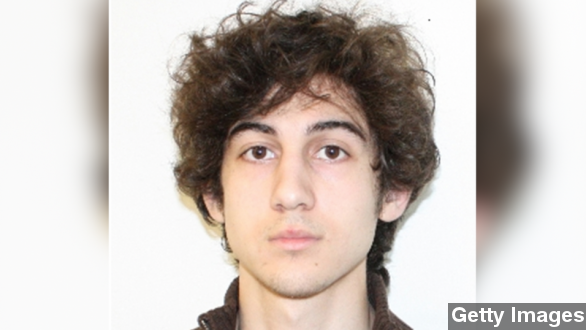 SMS
Can Dzhokhar Tsarnaev Get A Fair Trial?
By Ben Lawson
By Ben Lawson
January 5, 2015
The trial of Boston bombing suspect Dzhokhar Tasarnaev is underway, but his lawyers argue it will be difficult to find an unbiased jury.
SHOW TRANSCRIPT

Tsarnaev is accused of carrying out the 2013 bombing at the Boston Marathon, which left three people dead and more than 200 injured.

The bombing was considered the worst terrorist attack on U.S. soil since 9/11.

Which is why some are asking if a fair trial for Tsarnaev is even possible considering how many people were affected by the bombing in some way.

The defense had asked U.S. District Judge George O'Toole for a change of venue to a part of the country where potential jurors will likely not be predisposed on Tsarnaev's guilt or innocence, but O'Toole has firmly denied that request. (Video via The Guardian)

The defense has cited the 1997 Oklahoma City bomber trial, which did get a change of venue because of the impact on the community.

There is no arguing against the trauma caused to the Boston community, which is compounded by the fact it occurred at the highly celebrated Boston Marathon. But Oklahoma City bomber Timothy McVeigh was on trial for killing 168 people, 19 of which were children and injuring another 500 — far more casualties than in Boston.

A total of 1,200 potential jurors will be questioned on their possible bias in the case. That number will then be whittled down to a pool of 60. The prosecution and defense will select 12 to serve on the jury, and another six to be alternates.

Tsarnaev's father told ABC he thinks Americans in general are out to get his son. “The Americans are going to harm my second son the same way they did to my oldest son. We already know what’s going to happen. Everything is in Allah’s hand.”

Tsarnaev's older brother, Tamerlan, is also believed to have carried out the bombing and was killed in a shootout with police three days after the incident.

A Boston Globe poll conducted in September 2013 showed 57 percent of Bostonians favored life without parole as opposed to the 33 percent who supported the death penalty.

But even some who seem convinced of Dzhokhar's guilt doubt a fair trail is possible.

A columnist for The Boston Globe wrote, because of the "heinous" nature of the crime Dzhokhar is unlikely to get a fair trial, "because, as loath as anybody in the legal profession is willing to admit it, the presumption of innocence is more theory than practice."

But that same columnist told MSNBC he thinks a jury is capable of being objective.

"Juries take their responsibilities very seriously and they do expect prosecutors to prove their case."

Since prosecutors are seeking the death penalty, potential jurors must say they are at least capable of imposing that sentence, if necessary. The trial is scheduled to begin Jan. 26.