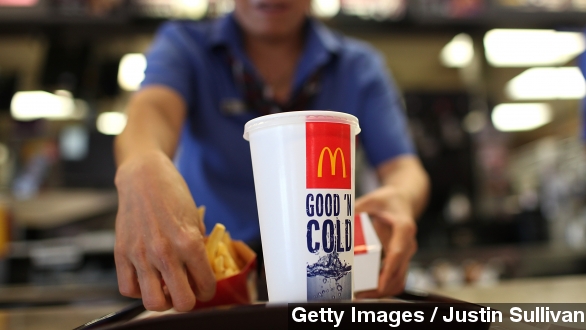 Monday, McDonald's announced a plan to let customers build their own burgers at some of its locations as part of a fight against declining sales.

The "Create Your Taste" program will come to 2,000 locations next year. Customers will be allowed to pick every ingredient that goes on a burger or chicken sandwich using a touchscreen kiosk. McDonald's executives told USA Today they think it will be the biggest game changer for the chain since it added breakfast to its menu.

The company announced the plan on the same day it posted some very bad news: its sharpest sales decline in over a decade.

The Wall Street Journal writes the company is blaming the decline on "strong competitive activity" from restaurants like Chipotle and Five Guys, two fast food restaurants that offer a more limited menu at a higher cost but with ingredients that are at least perceived as higher quality.

The "Create Your Taste" move seems to be geared toward snagging some of those customers back, but it might miss the point on why people go to McDonald's in the first place: price, convenience and speed.

A customized burger with fries and a drink costs $8.29 at one location, which is inching closer and closer to Panera or Chipotle prices. Also, "Create Your Taste" can't be sold through the drive-thru, where McDonald's does about 70 percent of its business. And it takes an average of seven minutes to fill custom orders, another jump from McDonald's signature speed. (Video via YouTube / lifehackerAU)

A Washington Post blogger calls the move toward more expensive menu items "a decidedly ineffective strategy, which appears to be the result of a misunderstanding of why and when people purchase food at the eatery."

But, with 13 straight months of falling U.S. sales, McDonald's executives are probably ready to try anything.