Can College Pride Turn Video Games Into A Mainstream Sport? 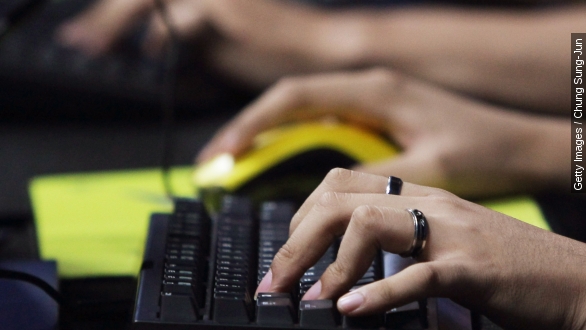 Something kind of weird happened on ESPN 2 Sunday night.

Nick "Tasteless" Plott said: "GG! UC Berkeley has done it! They are your winners!"

That was the moment when a team from University of California, Berkeley beat a team from Arizona State University to win video game developer Blizzard's Heroes of the Dorm tournament — on national television. (Video via ESPN)

The tournament, which featured Blizzard's upcoming "Heroes of the Storm" game, had screaming crowds, professional commentators and real stakes — Blizzard pays the rest of the winners' college tuition. (Video via Blizzard Entertainment)

And it also got a lot of reactions. #HeroesoftheDorm trended on Twitter, and big names chimed in. Some, like ESPN's own Colin Cowherd, didn't have many nice things to say.

"If ESPN ever forced me to cover that, or do play-by-play, I would quit," Cowherd said.

But Cowherd's former SportsNation co-host Michelle Beadle seemed genuinely taken with the tournament, tweeting, "I have not moved from this seat," and, "No joke, these announcers are killing it. I don't have a damn clue what I'm watching, but they won't let me leave."

A side note: Those announcers, brothers Sean "Day9" Plott and Nick "Tasteless" Plott, have been doing competitive gaming — or eSports — commentary as long as Beadle's been on ESPN.

Beadle wasn't alone — a lot of more traditional sports commentators took notice and that prompted a hopeful response from some eSports aficionados.

A writer for SB Nation argued the tournament proved eSports are meant for TV, and argued Heroes of the Dorm is actually small-fry, compared to bigger tournaments for more established games like "League of Legends" or "Dota 2." (Video via DreamHack)

But there was something uniquely appealing about the Heroes of the Dorm setup for traditional sports fans in the U.S., and you don't have to look very far to see what it was.

See, instead of packaging tournaments as games between eSports teams most mainstream sports fans have never heard of, Heroes of the Dorm had recognizable powerhouses like Florida and Kentucky.

Riding the wave of last month's March Madness, Heroes of the Dorm even had its own bracket.

It's not clear if eSports as a whole could make a similar transition — Heroes of the Dorm was mainly a promotional move for Blizzard to push "Heroes of the Storm," which comes out in June. (Video via Blizzard Entertainment)

But it may have inadvertently provided a model for other games to follow, playing on sports fans' pride and dedication to their team, both in the real world and the virtual.