Can Clinton Find A Line Of Attack Against Trump That Actually Works? 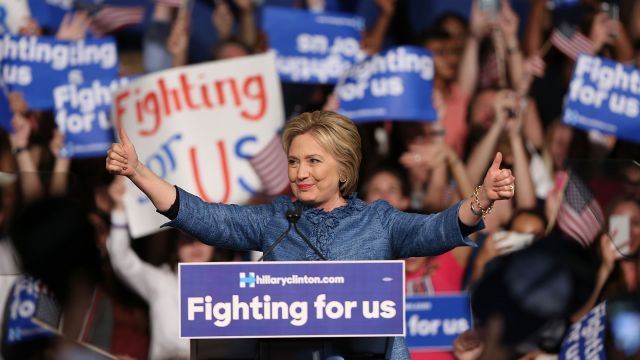 SMS
Can Clinton Find A Line Of Attack Against Trump That Actually Works?
By Zach Toombs
By Zach Toombs
June 6, 2016
Turning to the general election, Hillary Clinton has to answer a question that baffled the GOP primary field: What message works against Donald Trump?
SHOW TRANSCRIPT

"Donald Trump's ideas — they're not even really ideas," Hillary Clinton said in her recent speech on national security. "Just a series of bizarre rants, personal feuds and outright lies."

Clinton is turning her attention to the general election, which means convincing people not to vote for Donald Trump. That's what she's doing here today in San Diego, trotting out her new favorite line of attack. But a lot of people have a lot of different ideas about the best case to make against Trump.

"That is dangerous," she said of Trump.

So far, she's mainly been painting him as reckless, which didn't work in the primaries.

"He's a chaos candidate, and he'd be a chaos president," Jeb Bush said in a GOP primary debate on CNN.

And Clinton’s been running a campaign against Trump that’s not so different from the one President Obama ran against Mitt Romney.

"Gov. Romney has said he just wants to repeal Dodd-Frank," President Obama said in a 2012 debate hosted by NBC. "Roll it back."

"He wants to roll back the financial regulations," Clinton recently said of Trump.

But Trump is a very different candidate than Romney — with a different appeal. And with different weaknesses that Clinton has started to point out more often, mixing attacks on Trump’s character into the type of policy critiques you’d expect.

"It’s not hard to imagine Donald Trump leading us into a war just because somebody got under his very thin skin," Clinton said.

The idea that attacking Trump's ego resonates with voters is backed up by hard data. A survey from a veteran Democratic pollster shows that’s the area where voters feel most negatively toward Trump.

It's that line of attack that could work for Clinton in the general election — and it’s something we’ll hear a lot more of leading up to the conventions.

"Now, I’ll leave it to the psychiatrists to explain his affection for tyrants," Clinton said.