Can California Really Secede From The Union? 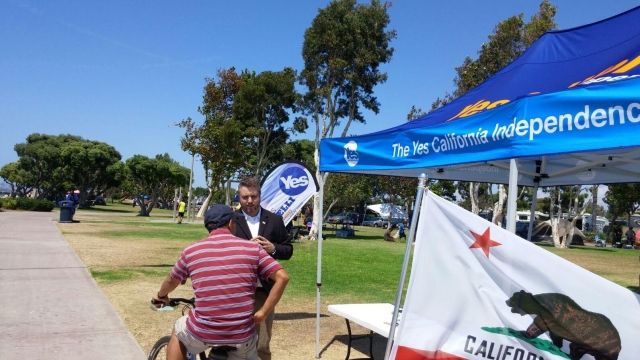 SMS
Can California Really Secede From The Union?
By Melissa Prax
By Melissa Prax
February 21, 2016
We talked to the president of the Yes California Independence Campaign about the secession movement happening in the state.
SHOW TRANSCRIPT

"People think Californians live in our own reality, with our heads in the clouds," an actress says in a video promoting California tourism.

The Yes California Independence Campaign gives those words a new meaning. It doesn't want its own reality, but it does want its own sovereign nation.

"I think a lot of the reasons why there's so much gridlock in Washington is because California is there with its own set of values," said leader of the movement Louis Marinelli.

"We could do universal health care, which is something I'd be for," Marinelli said. "We could go to universal education."

"I think that there needs to be due diligence," said one Californian. "A committee of people, of housewives, of regular people who regulate how this money is spent."

California has the largest economy in the U.S., so it leaving the union would deal a blow to the country's economic power. But Marinelli says the movement is about identity, not hostility.

"We're going to continue to do commerce with the Americans and be a part of the Americans in other areas, such as military involvement when our goals are aligned," Marinelli said.

Yes California is its own political party with 18 staff members and hundreds of volunteers, plus many across the country have pledged support.

"People initially thought it was kind of a joke or a kind of tongue-in-cheek moment," Marinelli said.

But there's an important question to answer first: Can California legally leave the union? The Supreme Court has weighed in on state sovereignty before, writing this about Texas secession in 1867, "There was no place for reconsideration or revocation, except through revolution or through consent of the States."

Marinelli has considered that ruling.

"But we can through the consent of the States become independent," Marinelli said.

Of course, that's still controversial. Marinelli is running for California State Assembly and then plans on proposing the laws there as an alternative to collecting signatures.

Keep in mind, plenty of other states have threatened to secede and forced the White House to review petitions after getting past the 25,000-signature threshold.

And in California, the separatist sentiment isn't exactly new. In 2012, the state secession movement didn't get enough signatures on its White House petition. And last year, there were several communities that voted on dividing California to become a 51st state.

So who knows? Maybe your next passport stamp will be from California.

This video includes clips from Visit California, Yes California Independence Campaign and State of Jefferson and images from Getty Images, Famartin / CC BY SA 4.0 and the White House.