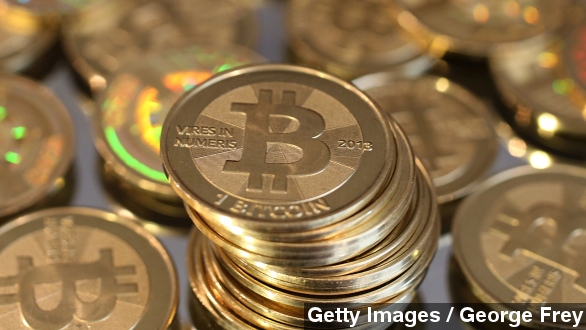 By Jay Strubberg
December 22, 2014
Bitcoin's stock has tumbled significantly this year, but more companies now accept it, leading supporters and critics alike to weigh in on its future
SHOW TRANSCRIPT

By now, you're probably aware bitcoin's stock has continued to tumble since its peak heyday in 2013 when it was valued at more than $1,100. It's now hovering at around $330 and has dropped more than 50 percent since the beginning of the year.

It lead at least one business writer to label the controversial digital currency the "worst investment of 2014" and "atrociously awful" even when compared to other struggling fiat currencies such as Russia's ruble.

But, despite the stock's poor performance this year, more and more powerful merchants have started allowing customers to use bitcoin for purchases.

So, bottom line, is it a thumbs up or thumbs down for bitcoin moving into the new year? Well, it depends who you ask, really.

Some supporters say this dip in bitcoin's value is a normal market fluctuation, possibly because there's more in circulation now, driving the value down.

That and, like we said earlier, there are just too many companies jumping on the bitcoin bandwagon in some form or another, including the great and powerful Microsoft, for businesses to look the other way.

On the other hand, skeptics argue that the price is low for a reason and a handful of governments have put up hurdles that prevent the digital currency from gaining real traction.

In fact, if you backtrack to last December, bitcoin values started taking a dive right after China banned it.

According to Bloomberg, Ukraine later followed suit with its own ban, Russia's considering fining those who use it and New York state has a bill in the works that could make record keeping more tedious for companies that accept it.

Plus, bitcoin isn't the only game in town anymore.

CoinMarketCap.com, a website that tracks the number of digital currencies on the market, says there's now more than 500 different brands competing against bitcoin, many of them very recent upstarts.

Probably its most legitimate threat is a company called Ripple, which boasts a fast payment system, similar to PayPal. Though it still has quite a bit of ground to make up to give bitcoin a run for its (digital) money.

It's that very dominating bitcoin presence that leads a Vox writer to believe the cyptocurrency's financial network is "too powerful" now for the government to try and hamstring its growth.

"Bitcoin has more powerful allies than it did two years ago. ... If the regulators were going to try to shut [it] down, ... they would have done it two years ago when it was still a fringe technology with no real support among elites. Now it's too late."

But a writer for The Washington Post argues bitcoin's system is doomed to fail because governments have a lot of say when it comes to any financial system and can put pressure on those intuitions as it sees fit.

"Up to this point, regulators have largely tolerated Bitcoin as a curiosity and experiment. ... If Bitcoin were ever to threaten to become a truly decentralized payments network, owned by no one, ... regulators would know very well what to do with it."

So, is it too big too fail or has it already failed too big? We'll just have to leave that for the market to decide.