Can A Papal Visit Cure What Ails American Catholicism? 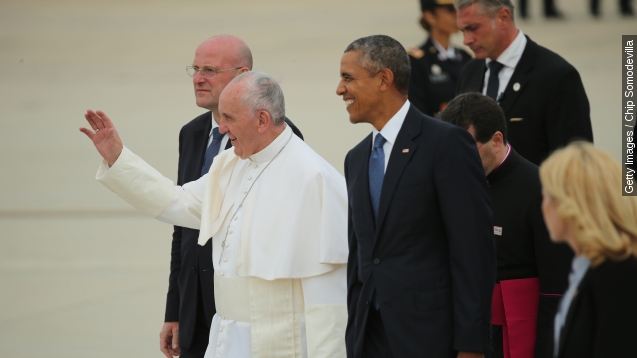 Pope Francis' U.S. visit comes at a time when many American Catholics are feeling uneasy about the future of the church. (Video via Vatican Television Center)

When Pope Benedict XVI visited the U.S. in 2008, poll numbers showed Catholics made up just under a quarter of the U.S. population, and that percentage had held steady for decades. (Video via C-SPAN)

Now it's on the decline. The latest Pew Research Center survey on religion found the percentage of Catholics in the U.S. dropped several points to just over a fifth. It was part of an overall decline in American Christianity, with more people than ever identifying as religiously unaffiliated.

The drop seems sudden, but there's an ongoing story behind the numbers. Hispanic immigration in the 2000s helped keep the percentage of Catholics high, because Hispanics are more likely to be Catholic. But it was no secret that Americans who grew up in the church had been leaving it in pretty steady numbers. (Video via CNN)

There's been a lot written about the decline of U.S. Catholicism and what it means. Catholics with a conservative viewpoint, like Bill Donohue, tend to blame the slide on churches changing their teachings to appeal to the general public, losing their Catholic identity. (Video via CNN)

Liberal Catholics say it's the exact opposite: The church's views on things like contraception, the role of women, divorce and homosexuality have made the church seem hostile and unwelcoming.

A lot of blame also gets placed on the church's high-profile child abuse scandals in the 2000s. The church was accused of sheltering sexual predators while shaming victims into staying silent. But it's not clear the scandals had any long-term impact on the church's numbers. (Video via RTE, Orange County Register)

American opinion on the Catholic Church dipped after the revelations but has since recovered, according to Gallup. The pollsters also found attendance took a hit at the height of the scandals but bounced back shortly after.

In fact, maybe the best explanation for why the Catholic Church has declined in the U.S. is that American Christianity as a whole has declined. Maybe it's not a uniquely Catholic problem. Which gets us back to Francis.

Pope Francis is overwhelmingly popular, with both Catholics and the public generally, so there's hope he can bring more energy to the American Catholic Church. His focus on charity and humility has earned him tons of goodwill, like when he suspended Germany's so-called "Bishop of Bling" over his lavish homes or when he washed the feet of inmates. (Video via Vatican Television Center, Deutsche Welle, CBS)

He's tackled Catholic bureaucracy, too, pushing the Vatican Bank down the path to reform in the hopes of making it more transparent. He's also sharply critiqued the Roman Curia, the Vatican's central governing body, accusing it of mismanagement and unwillingness to adapt. (Video via Vatican Television Center)

But have his reforms, his demonstrations of compassion for the poor and his focus on social issues actually attracted more Americans to the faith?

So far, there isn't much evidence it has. Historically, the popularity of the pope doesn't have a huge impact on whether people actually show up on Sundays.

A Georgetown University-affiliated research group found what might be evidence of some kind of "Francis Effect," but it's not related to attendance. Instead, there's been a bounce in the percentage of Catholics who consider their Catholic affiliation "strong." That's something, at least. (Video via Vatican Television Center)

And it's still possible his visit could re-energize American Catholicism, which, despite its recent slump, is still one of the more resilient religious groups in the U.S. At least that's what many Catholics are hoping for.