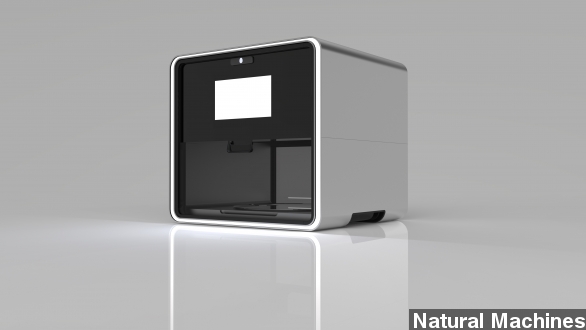 Hate to cook, but love having a nice meal at home? Well check this out.

This is a 3-D food printer that can make you lunch, dinner or even just a snack. You just load up the capsules with your favorite ingredients and it prints your food — with some preparation required depending on the dish.

The printer is called "Foodini" and its creators note it is much smaller than traditional 3-D printers. They also say it doesn't make your typical overly-processed instant meal either.

The company introduced the concept back in March with a Kickstarter campaign that ultimately fell short of their $100,000 goal.

Undeterred, Natural Machines kept working on the concept, and unveiled a functional printer during this week's Web Summit in Dublin.

CNBC ANCHOR: "It's edible, it's good, and I'm impressed that this machine can make food."

Of the many potential uses for 3-D printers, printing food has been a popular goal for the technology.

And back in September 2013, a writer for The New York Times sat down to an entire three-course meal of 3-D-printed food, courtesy of Cornell University.

But the Foodini does have its critics, including one WCBS food expert who says it can't replace the feeling of actually cooking a meal.

WCBS: "They knead the dough, they have to smell the tomatoes, you know. It’s all part, it’s all passion with food. If something’s doing that for you, where’s the fun?”

Natural Foods says they hope to have Foodini in mass production next year. The cost for the machines will be about $1,300. It is currently working with manufacturers to come up with pre-packaged healthy food capsules for the machine.