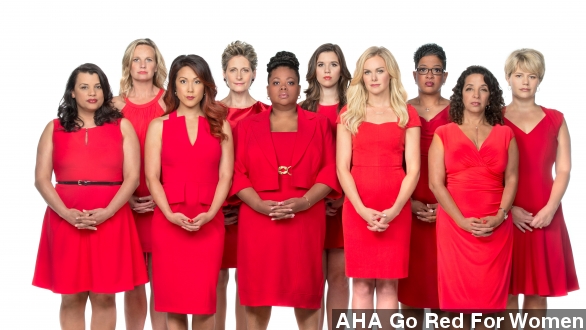 SMS
Campaigns Challenge Myth That Women Don't Get Heart Disease
November 16, 2014
Many women still view heart disease as a men's problem, but years of campaigning are getting the word out that it's the number one killer of women.
SHOW TRANSCRIPT

Heart disease is the number one killer of women, causing more deaths than all forms of cancer combined. But for decades, it's gone under-diagnosed because of the belief that heart disease affects mostly older men. Thankfully, that misconception is slowly changing.

I spoke with cardiologist and American Heart Association spokesperson Dr. Suzanne Steinbaum about how this shift took place.

STEINBAUM VIA SKYPE: “When I go out and say heart disease is your number one killer more than all cancers combined, I remember 10 years ago, I remember five years ago everyone saying ‘Really? Are you sure?’ Isn’t it breast cancer? ‘And I see now they’re saying, yeah, we’ve heard of that.’”

Women’s health advocates point out most research on diagnosing and treating heart problems has relied on male subjects. But symptoms often look different for women. Even heart attacks can sometimes be so subtle in women that they aren't properly diagnosed.

STEINBAUM VIA SKYPE: “Women are different. We need to investigate and figure out what’s going on with women’s bodies. We can’t just extrapolate the data like we have been doing for many, many years.”

In 2004, the AHA began the Go Red for Women campaign after finding women and doctors were not paying enough attention to heart health.

STEINBAUM VIA SKYPE:“We just didn’t think of women back then of having heart disease.”

“I started having some drooping of my lip and my face was numb.”

It's also relied on celebrities like Star Jones, Jennie Garth and Betty White to help get the word out.

GARTH VIA AHA GO RED FOR WOMEN: “There’s nothing like a group of women that rally together in support of one another. Together we truly can prevent heart disease.”

In 2011, Elizabeth Banks appeared in the AHA’s short film “Just a Little Heart Attack,” acting out real-life stories of women who were tempted to ignore early warning symptoms because they were too busy.

“Mom, I think you’re having a heart attack.”

“Honey, do I look like the type of person who has a heart attack?”

That short film used comedy as a method of generating awareness, but a new organization is taking a different approach.

A creepy set of ads called "I Am The Lady Killer" uses shock to spread the word. The ads were put out by the Women's Heart Alliance, co-founded by Barbra Streisand, following a disappointing survey that showed most women still underestimate their risk of heart disease.

Since Go Red for Women took up the cause 10 years ago, more than 900,000 women have committed to improving their heart health and more than 200,000 healthcare workers have received information specific to women and heart disease.

STEINBAUM VIA SKYPE: “I think all women need to empower themselves to get checked, to know what their risk factors are, to push their doctors, to become aware of their own bodies and know if they’re not feeling well.”