Campaign To Keep Scotland In U.K. Leans On Star Power 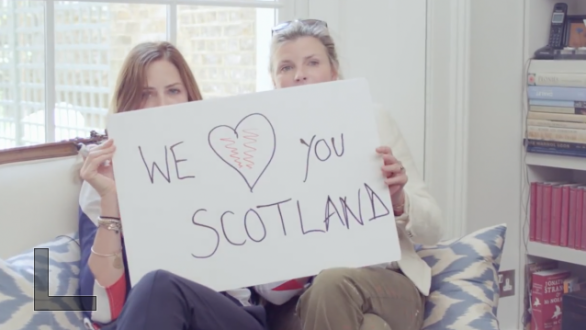 By Ben Lawson
August 30, 2014
Both sides of the debate over whether Scotland should separate from the U.K. are heavily using celebrities to influence public opinion.
SHOW TRANSCRIPT

As the vote on whether Scotland will remain a part of the United Kingdom draws nearer, more and more celebrities are voicing their opinions on the matter.

Sir Paul McCartney become the most recent figure to sign an open letter urging Scots to shoot down the independence campaign.

Hundreds of British celebrities have now signed a "Let's Stay Together" campaign letter.

The letter reads "The decision on whether to leave our shared country is, of course, absolutely yours alone. Nevertheless, that decision will have a huge effect on all of us in the rest of the United Kingdom. We want to let you know how very much we value our bonds of citizenship with you, and to express our hope that you will vote to renew them."

Celebrities such as Mick Jagger, Stephen Hawking, J.K. Rowling and countless more have attempted to catch Scotland's attention and at first things looked good for their side of the issue.

Independence would give Scotland more freedom in governing themselves but critics argue there is a lot of uncertainty of knowing what effect it could have on the economy in Scotland and the U.K. as a whole.

But after the latest debate between Scottish National Party leader Alex Salmond and Better Together campaign leader Alistair Darling, the gap seems to be narrowing.

That could also be because even more celebrities are voicing support for an independent Scotland.

"They may take our lives but they will never take our freedom!" (Via Paramount Pictures / "Braveheart")

Scottish actor Sean Connery has even said he will move from the Bahamas back to his home country if the referendum passes.

Voters will decide if Scotland will remain a part of the U.K. on Sept. 19.