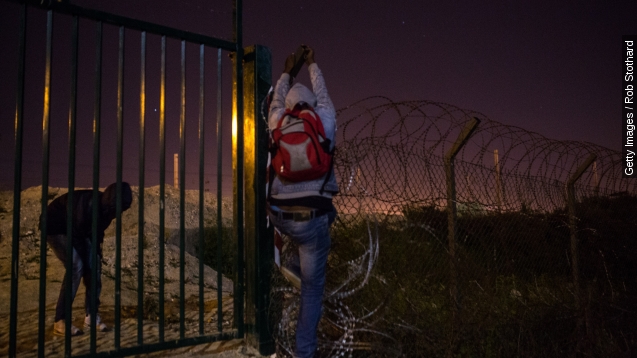 SMS
Cameron's Answer To 'Calais Crisis' Is More Border Security
By Sebastian Martinez
By Sebastian Martinez
August 16, 2015
Migrants are jumping the fence in Calais, France, to try to get to Britain through the Channel Tunnel. Is tightening security there a viable strategy?
SHOW TRANSCRIPT

Scores of migrants camped out in Calais, France, have become a pressing issue for British Prime Minister David Cameron. (Video via YouTube / brianwhelandotnet)

Because many of those migrants are attempting to cross the English Channel into Britain. (Video via BBC)

But the way Cameron's been addressing the problem hasn't won him many fans.

"You've got a swarm of people coming across the Mediterranean, seeking a better life, wanting to come to Britain," Cameron told ITV.

Those comments drew accusations that Cameron was dehumanizing the migrants, some of whom are refugees from the war in Syria.

Months ago, when the European Union was formulating a plan to deal with the thousands of migrants crossing the Mediterranean, Cameron made it clear the U.K. didn't want to be part of their relocation. (Video via United Nations, Sky News)

Now, many of those migrants are doing what they can to make the crossing, be it through the Channel Tunnel, by boat or even by trying to swim the channel. (Video via RT)

In response, British Home Secretary Theresa May says the British government is investing in reinforcing fencing in Calais to protect the tunnel. (Video via Channel 4)

French authorities have criticized that plan, saying the fencing will push migrants to find other ways to cross until a political solution is found. (Video via YouTube / Voice of the Unseen)