Cameron Diaz And Benji Madden Married After A Year Of Dating 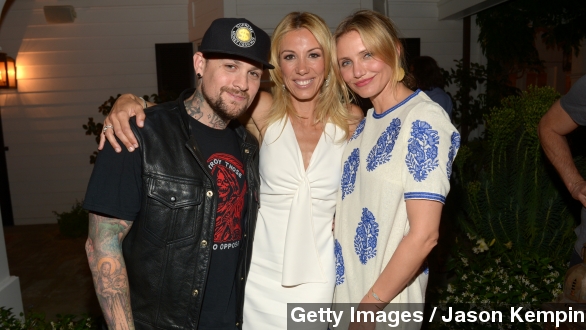 It's been a real whirlwind, folks! After less than a year of dating, Cameron Diaz and Benji Madden are reportedly man and wife.

An anonymous source told People the couple tied the knot Monday night at their home in Beverly Hills. "Getting married is the next step when you are totally in love and comfortable with someone. Cameron has found true happiness."

News of 42-year-old Diaz and 35-year-old Madden’s nuptials broke only a few hours before the ceremony, with multiple media outlets reporting plenty of activity inside the couple’s gated community Monday afternoon.

And they reportedly hosted an intimate rehearsal dinner over the weekend for family and friends, including Drew Barrymore, Nicole Richie and Joel Madden.

Diaz and Madden have been together since May and reportedly got engaged just before Christmas. And if you’re thinking this quickie wedding seems a little too quick, you’re not alone. (Videos via 20th Century Fox / "The Other Woman," Capitol Records / The Madden Brothers)

Even Diaz herself has said over and over again in interviews she hasn’t ever felt the need to get married and settle down. (Video via ABC)

Most recently, the actress told InStyle in May marriage doesn’t always guarantee bliss. “A lot of people chase after it because they've been told, 'This equals happiness.' They chase it, they get it, and they find out, 'Why did I think this was going to make me happy? I'm miserable!'”

So is there another reason besides love that had Diaz and Madden practically running down the aisle? Again, Diaz’s comments over the years haven’t indicated she was in any rush to procreate.

She told Esquire in August, “I like protecting people, but I was never drawn to being a mother.”

Well, whatever the reason behind their surprise wedding, we hope it brings them nothing but happiness! This is the first marriage for both Diaz and Madden.