Cameron And Orban May Agree On More Than We Think 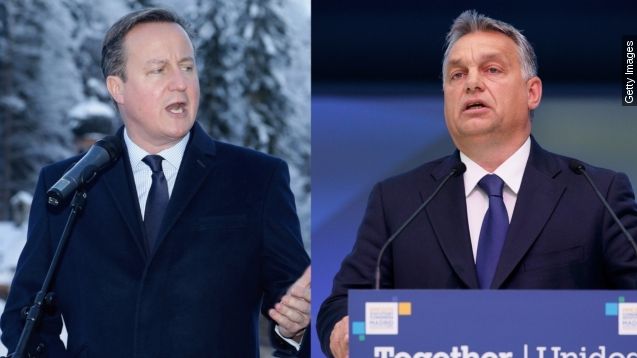 SMS
Cameron And Orban May Agree On More Than We Think
By Eugene Daniels
By Eugene Daniels
January 7, 2016
Despite some political hiccups, it's easy to see why David Cameron and Viktor Orban would team up for EU reforms.
SHOW TRANSCRIPT

David Cameron's latest "should I stay or should I go?" EU tour hit a speed bump in Hungary after the country's prime minister called Cameron out on some of the unflattering comments he made about immigrants to the U.K. (Video via BBC)

Hungarian Prime Minister Viktor Orban, who for the most part is on board with Cameron's proposed EU reforms, told the British prime minister, "We are citizens of a state that belongs to the European Union, who can take jobs anywhere, freely. ... We don't want to be parasites. We want to work there. And I see that Hungarians are working very well."

That parasite dig seems to be a reference to this comment:

"You've got a swarm of people coming across the Mediterranean seeking a better life wanting to come to Britain because Britain's got jobs," Cameron said in an interview with ITV.

Specifically, the Hungarian PM is unhappy with Cameron's plan to restrict welfare for four years to any EU migrants who enter the U.K. Orban told the press Hungarian immigrants "should get respect and they should not suffer discrimination."

Despite that little hiccup, Cameron and Orban have a lot more in common when it comes to noncitizens coming to their countries than one may think. (Video via Hir TV)

Hungary has taken a pretty hard-line stance when it comes to the refugee crisis — even meeting refugees with tear gas and water cannons. Orban has called the crisis a "migratory movement composed of economic migrants, refugees and also foreign fighters." (Video via Al Jazeera)

And Cameron's been criticized for not taking enough refugees during the crisis and for saying things like, "And when we do take refugees, to take them from the region, rather than acting in a way that encourages more to make that dangerous journey." (Video via Channel 4 News)

The reforms both men have completely agreed on: protection of the single market, boosting competitiveness and bolstering national sovereignty.