Camerawoman Wants To Sue One Of The Refugees She Tripped 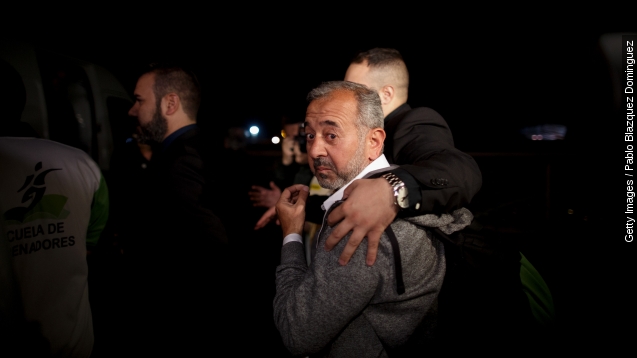 SMS
Camerawoman Wants To Sue One Of The Refugees She Tripped
By Katie Link
By Katie Link
October 21, 2015
The camerawoman accused of tripping refugees as they crossed the border into Hungary last month now plans to sue Facebook and one of the refugees.
SHOW TRANSCRIPT

Remember the camerawoman who was caught on camera kicking and tripping migrants crossing from Serbia to Hungary last month?

Well, she's back in the news again. This time because she's suing Facebook — and get this — one of the Syrian refugees she tripped. (Video via N1TV)

According to a Russian newspaper, camerawoman Petra Laszlo is suing the social media site for allegedly failing to take down threatening and negative pages created about her. Pages like the "Petra Laszlo Shame Wall" have more than 10,000 likes and lots of nasty comments. (Video via N1TV)

The migrant she's suing? That's Osama Abdul Mohsen. She says he first blamed police for his fall and then changed his testimony. (Video via RTL / Stephan Richter)

Laslzo was fired from her job at N1TV in September after the incident went viral. According to The Guardian, she also faces a criminal investigation in Hungary for accusations of "violence against a member of the community."

She apologized for her actions in a newspaper letter. She wrote: "It's hard to make good decisions at a time when people are in a panic. I'm not a heartless, racist, children-kicking camerawoman. I do not deserve the political witch-hunts against me, nor the smears or the death threats."