Cam Newton Walks Out Of Post-Super Bowl Presser, Gets Roasted For It 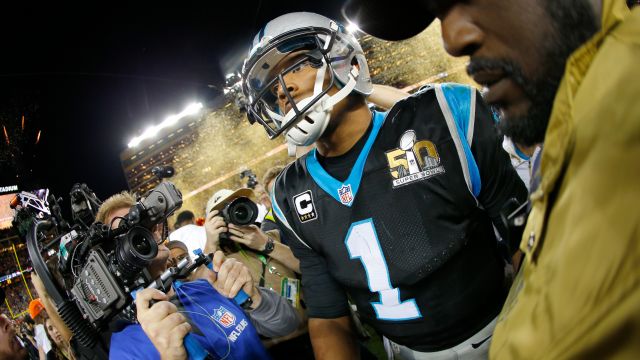 If the Carolina Panthers had won the Super Bowl, it would've capped off one of the best years for a starting quarterback in NFL history.

Instead, the ending of Cam Newton's season left a bad taste in everyone's mouth.

"I'm done," Newton said as he made his way off the podium.

Newton, heralded as the new face of the NFL, was criticized for pouting and walking out of the postgame press conference after the Super Bowl 50 loss.

While the press conference didn't make him look great from a PR standpoint, Newton still had one of the most memorable years ever for a quarterback.

Aside from the Lombardi, Newton has won just about every trophy imaginable. He played in his first Super Bowl just a day after being named the NFL's Most Valuable Player. (Video via ESPN)

Heading into the the big game, Newton had a chance to become only the second player to win the Super Bowl, NFL MVP, NCAA championship and the Heisman Trophy in his football career. (Video via Fox Sports)

USC Trojans and Los Angeles Raiders legend Marcus Allen is the only player to accomplish that feat.

Newton is the first QB in history to throw for more than 30 touchdowns and rush for 10 more in a single season, compiling 45 touchdowns by the end of the season. He also tied Steve Young's career record for most rushing touchdowns by a QB in NFL history, racking up 43 rushing touchdowns in just 78 career games — all before his 27th birthday, no less.

Newton received 48 of 50 votes for MVP after leading his team to a 15-1 record. Now that's something we can all dab to.