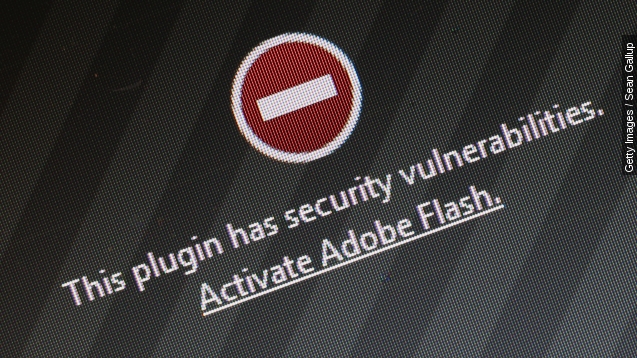 Adobe's Flash has, once again, come under fire. This time the software platform's banishment is due to a security flaw that was discovered in early July.

The Guardian reported that because of the flaw, malware developers hacked more than 400 gigabytes of data from an Italian company's servers before a fix was released.

It's also likely the flaw could've been exploited by other cybercriminals in the time it took to create a patch. Which is giving a handful of tech companies more fuel to get Flash off the web for good. (Video via KPNX)

Not only did Facebook's top security guy call for Flash's death, Google and Mozilla both recently made tweaks to their browsers — Chrome and Firefox — to either disable unnecessary Flash plugins or disable Flash alltogether.

We already know that products can survive and even prosper without using Flash. Steve Job's vision for iOS devices more than prove that.

"We just made a technical decision that we weren't going to put the energy into getting Flash on our platform. We told Adobe, if you ever have this thing running fast come back and show us  — which they never did," Steve Jobs said in 2010.

And even though Flash hasn't kept up with competitors — like HTML5 — the platform is still used all over. Maybe not to the extent it was in 2010 or earlier, but if you've ever played Farmville then you've used Flash. (Video via Zynga)

Some video players are still Flash based and so are a lot of advertisements. We should also note that even Mozilla reintroduced the Flash plugin for Firefox this week — after the patch was working and some of the dust had settled.

So, what did Adobe have to say about the resurgence of Flash hatred? The company's statement was pretty bland, but here's the important part:

"Flash Player is one of the most ubiquitous and widely distributed pieces of software in the world, and as such, is a target of malicious hackers. We ... will work to quickly address issues when they are discovered."

So, if you're ready to unplug your browsers from Flash, Wired has a handy how-to. And for the record, they too agree: "Flash. Must. Die."