Calling Out Your Team's Own Fans Is Usually A Bad Move 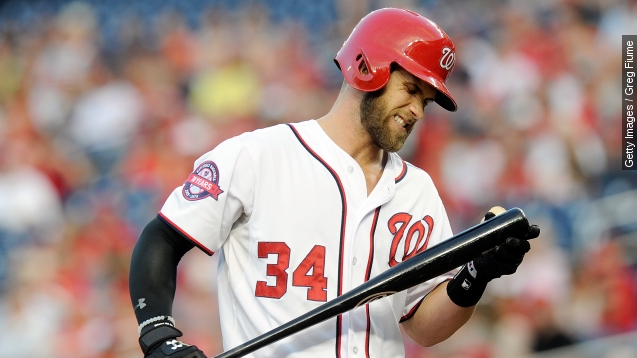 SMS
Calling Out Your Team's Own Fans Is Usually A Bad Move
By Carter Woodiel
By Carter Woodiel
September 7, 2015
Bryce Harper is the latest to call out his own fans for being unenthusiastic, but lots of athletes hurl that same accusation toward the stands.
SHOW TRANSCRIPT

Washington Nationals outfielder Bryce Harper is known for his brash attitude, but on Monday he may have crossed a line — by calling out the home fans.

Asked after the Nats' Monday loss to the New York Mets about the game’s atmosphere, he quipped, "I mean, [the fans] left in the seventh, so that was pretty brutal."

Yikes. It seems Harper took issue with the fans leaving the game early, including what looked like a mass exodus with their club down three in the ninth. (Video via ESPN)

Calling out fans is always a risky proposition for an athlete, but athletes keep getting into hot water for doing it.

This past NBA season, then-Suns forward Markeef Morris — echoed by his twin brother Marcus — criticized fans in Phoenix for not cheering enough.

“I just feel like we just expect more from those guys, from the fans. That’s basically what I’m getting to,” Markeef said.

“Sometimes when you come out flat you need your fans to pick you up. And we didn't get that tonight,” Marcus said. (Video via The Arizona Republic)

The twins would sign autographs for fans a little over a week later, likely as a way of making amends, but after being traded to Detroit this offseason, Marcus called Phoenix fans bandwagoners on Twitter.

Coaches have gotten in on the act, too.

University of North Carolina basketball coach Roy Williams had some words about fan support after a win last season.

"I felt like they were asleep most of the day anyway, so that was about all right," Williams said at his postgame presser. "And that's not intended to be criticism, but it's criticism. We need some daggum help." (Video via The News & Observer)

Harper isn’t even the only Nats player to call out their fans recently.

Closer Jonathan Papelbon said he had a "bone to pick" with fans who weren't enthusiastic during a recent extra-inning win Friday.

Though Harper may take some flak for his jab about the home supporters, you can understand why he was frustrated. The Nationals' loss to the Mets leaves them five games behind New York in the N.L. East race.