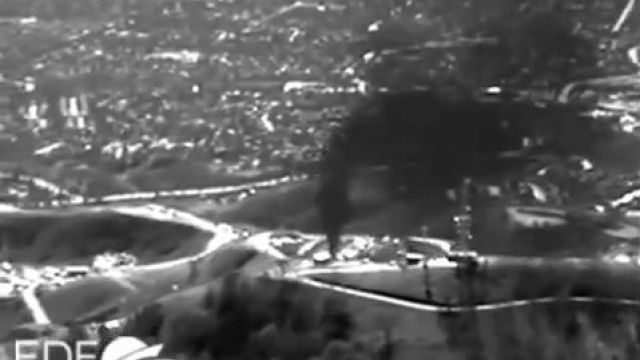 SMS
California's October Gas Leak Looks To Be The Worst In US History
By Ryan Biek
By Ryan Biek
February 25, 2016
Roughly 100,000 tons of methane were released into the atmosphere for almost four months.
SHOW TRANSCRIPT

The first study to estimate the fallout of October's methane leak in California found it was the largest leak in American history.

It took almost four months for the well at the Aliso Canyon storage facility to be sealed. In that time, about 100,000 tons of methane were released.

It's roughly the equivalent of burning almost a billion gallons of gasoline, in terms of carbon dioxide pollution.

Researchers measured the leaking gas in real-time with instruments mounted on a single-engine plane.

One of the lead scientists said in a press release: "It became obvious that there wasn't anything wrong with the instruments. This was just a huge event."

Methane is the main component in natural gas. It's also a powerful greenhouse gas, trapping the sun's energy around 25 times more effectively than carbon dioxide.

More than 11,000 residents were evacuated after the leak began, with many suffering from headaches, nosebleeds and coughing. California's governor declared a state of emergency in January.

Meanwhile, California's goals to cut emissions have been called some of the most ambitious in the country, but the leak could make 2016's pretty hard to meet. Regulators say they aren't sure how they'll include the leak's emissions in the count.

This video includes clips from KCBS, the Environmental Defense Fund and Stanford University.