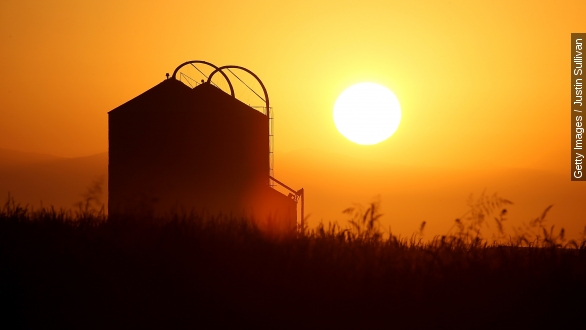 In mandatory statewide restrictions announced April 1, Brown detailed plans to plant 50 million acres of hardier drought-resistant vegetation and to enforce a 25 percent cutback in drinking water use in homes and businesses. (Video via Sacramento Bee)

But regulation was light or nonexistent on California's agricultural industry, which accounts for some 80 percent of potable water use in the state. On ABC's "This Week," Brown said agriculture is too vital to disrupt.

"Of course we could shut it off. If you don't want to produce any food and import it from some other place, theoretically you could do that. But that would displace hundreds of thousands of people, and I don't think it's needed," Brown said.

Of course, state farming and energy sectors are already feeling the heat of years of sustained drought, to say nothing of its flora and fauna.

Aerial photos from Getty Images show a stark contrast between controlled landscaping and the rest of the ground. And the creeping brown is not limited to cropland or suburbs.

The effects of the drought are clearly visible from orbit, from the plains to the mountains.

"It's actually quite alarming. There's snow only up high in the peaks. You know, I've been to the Tahoe region in July and seen more snow than I saw this past week," said NPR's Kirk Siegler.

Numbers from the University of California, Davis show California's economic loss to the drought in 2014 alone was more than $2 billion.