California Firefighters Are Dealing With 10 Wildfires Across The State 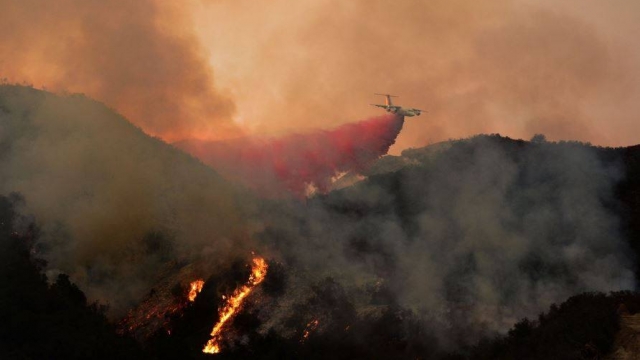 SMS
California Firefighters Are Dealing With 10 Wildfires Across The State
By Samantha Crook
By Samantha Crook
June 20, 2016
The Sherpa fire started Wednesday and has burned more than 7,800 acres.
SHOW TRANSCRIPT

Firefighters are working to contain multiple wildfires in California, and a record-breaking heat wave isn't helping the situaiton.

The heat is making firefighting efforts more challenging and could be contributing to the Sherpa fire in Santa Barbara County. The fire started Wednesday and has burned more than 7,800 acres, but firefighters are making progress. Officials say it's now 54 percent contained.

California says more than 3,000 firefighters are fighting 10 large wildfires across the state.

In addition to the fires, the Southern California heat is also being blamed for power outages because of increased strain on the power grid.

Extreme heat is also affecting other parts of the Southwest, including Arizona where four hikers died from heat-related emergencies this weekend.

This video includes images from the California Department of Forestry and Fire Protection.