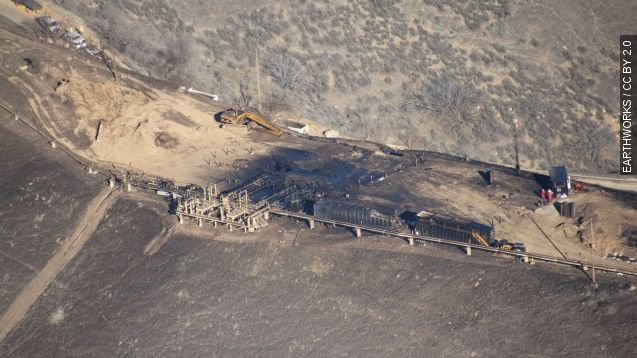 SMS
California Declares State Of Emergency Over Serious Gas Leak
By Melissa Prax
By Melissa Prax
January 8, 2016
An severe gas leak in Southern California has displaced dozens of people from their homes. The gas company responsible is facing at least 25 lawsuits.
SHOW TRANSCRIPT

A methane gas leak near Los Angeles has officially been declared a state of emergency. And some experts say it could cost the Southern California Gas Company more than $1 billion.

The leak started in October, and tens of thousands of kilograms of methane are pumping out every hour. (Video via Environmental Defense Fund)

Technically methane is not poisonous, but if you breathe it in, it can displace oxygen and cause suffocation. The gas is also highly explosive. (Video via Morgan and Morgan)

The gas company has spent about $50 million to fix the leak. It's also facing at least 25 lawsuits. (Video via KCAL)

Most of those suits involve lowered property value and displacement. Dozens of nearby residents have had to move or complained about having minor health issues. (Video via Los Angeles Times)

With a state of emergency declared at the state level, there will be some help with funding and resources. It's hard to say how much the state will allocate. (Video via KTLA)

Some officials say the leak could take as long as two more months to seal. (Video via KABC)

This video includes an image from EARTHWORKS / CC BY 2.0.