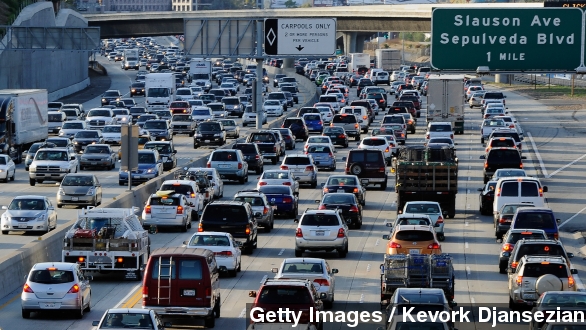 SMS
Calif. Undocumented Immigrants Get Shot At Driver's Licenses
By Cliff Judy
By Cliff Judy
January 2, 2015
Undocumented immigrants in California can begin applying for driver's licenses Friday. It's a polarizing issue for some and welcome change for others.
SHOW TRANSCRIPT

In a move some believe is forgiving illegal activity and others say is practical in an imperfect world, undocumented immigrants in California can register for a driver's license starting Friday.

The state's department of motor vehicles expects huge lines in the coming weeks with 1.4 million immigrants expected to file for licenses over the next three years. (Video via KNBC)

California's legislature passed Assembly Bill 60 in the fall of 2013 with Democrats saying it would make highways safer by encouraging undocumented immigrants already driving to learn the state's rules of the road.

As with virtually any issue related to undocumented immigrants, of course, there are detractors.

"I think it legitimizes being here illegally," Pat Tyson, a Glendale resident, told KABC. "We all have rules to follow and then we get rewards from following those rules."

The Los Angeles Times spoke with several undocumented immigrants who say they often avoid driving at night or altogether not wanting to risk an expensive run-in with a traffic officer.

A supporter with a nonprofit group offering driving preparation classes to immigrants said, "It's going to change everything. Once people are able to lose a little bit of the fear they had of being on the road, that will increase participation."

To get a license, drivers will have to prove they live in California and pass tests like vision, a written exam and a behind-the wheel test. The state's DMV website says it hired an extra 900 workers to handle all the extra people coming in for licenses. (Video via KTTV)

The National Immigration Law Center now lists California as 1 of 10 states to allow undocumented immigrants to apply for a driver's license. (Video via KTLA)

The Los Angeles Times reports undocumented immigrants could get licenses in California up until 1993 when state lawmakers passed a bill requiring first-time applicants to provide a Social Security number.