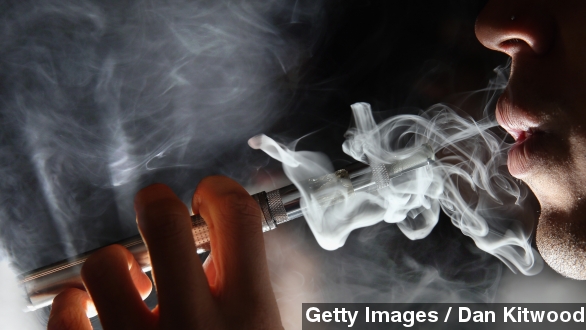 The California Department of Public Health issued an advisory this week urging the state's residents to avoid or stop using e-cigarettes. (Video Via BBC)

The report said, like traditional cigarettes, e-cigs use cancer-causing chemicals and can lead to nicotine addiction.

It also attacked the commonly held belief that e-cigarettes only emit water vapor, saying the devices actually emit a "toxic aerosol" and that secondhand e-cig smoke is still dangerous. (Video Via CNN)

"They're marketing this as if it's a healthy alternative. They did this 50 years ago with low tar and light cigarettes and now they're doing this with e-cigarettes," Timothy M. Gibbs of the American Cancer Society said.

E-cigarettes are particularly popular with young people, and the report accuses the industry of marketing the devices to teens and not mentioning they contain nicotine.

It also claims the widespread use of fruit and candy flavoring can entice small children to ingest the poisonous liquids.

E-cigs were introduced in the U.S. in 2007 and have since taken off.

And the University of Michigan's Monitoring the Future survey found that of the 8th and 10th graders surveyed, twice as many used e-cigs than traditional cigarettes.

Meanwhile, the U.S. Food and Drug Administration is proposing regulations that would require warning labels and ingredient lists on e-cigarette packages.

Monday, a California senator introduced a bill that would ban the use of e-cigarettes in public places.