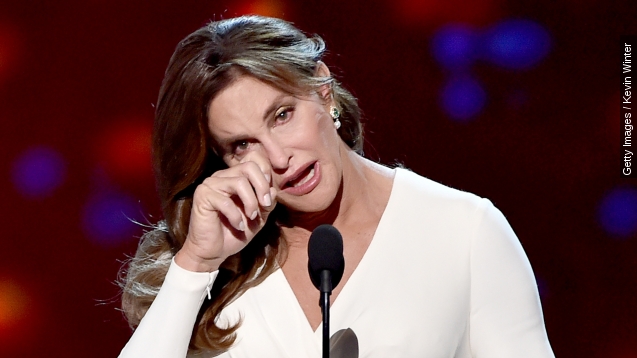 But the tears really started flowing once the Olympic athlete began to thank her entire family for their undying support during her transition into a woman.

Caitlyn was visibly choked up when it came time to acknowledge the Kardashian and Jenner families, who were all present at the Microsoft Theater to watch her accept the Arthur Ashe Award. (Video via E! / "Keeping Up With the Kardashians")

She said, in part, "The biggest fear I've always had in coming out is I never wanted to hurt anyone else. Most of all, my family and my kids. ... You guys have given so much back to me, you have given me so much support, I am so, so grateful to have all of you in my life."

Of course, Caitlyn's family has been very public with their support ever since she confirmed her transition during an interview with Diane Sawyer in April. (Video via E! / "I Am Cait")

"It's a really brave thing to come out and, you know, be so truthful. And, to have all of that support, I think just meant the world to him. And our family." (Video via ABC / "Jimmy Kimmel Live")

"He's the most amazing person I know. I couldn't ask for a better dad." (Video via E! / "Keeping Up With the Kardashians")

They continued to show that incredible support before the ESPY Awards, dressing in matching outfits and posing for pictures as they waited for the show to start.

Brody Jenner even gushed about how proud he was of his parent on the red carpet. He told E!, "I think it's an incredible honor, and I think there were many deserving people that could [have] got this award, and I think Caitlyn was the perfect one."

Caitlyn received a standing ovation both before and after her moving speech, which also called for better understanding of transgender rights.

She said, "For the people out there wondering what this is all about — whether it’s about courage or controversy or publicity — it’s about what happens from here. It’s not about just one person. … It’s not just about me, it’s about all of us, accepting one another."

To see Caitlyn's speech in its entirety, head over to ESPN's website.