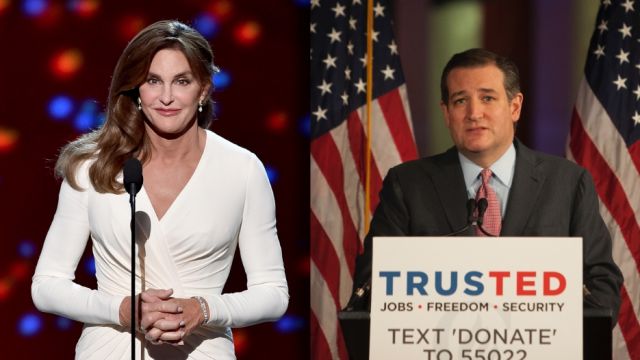 That was before the battle surrounding the so-called "bathroom bill" heated up. Now it looks like Jenner's loyalty might be changing.

She posted this video on her Facebook on Wednesday, urging people to #flushdiscrimination. "Last week Donald Trump said I could take a pee anywhere in a Trump facility, so I am going to go take a pee in the ladies room," Jenner said.

Jenner's name came up during a recent interview on the "Today" show, when Trump was asked to weigh in on North Carolina's controversial House Bill 2.

"So if Caitlyn Jenner were to walk into Trump Tower and want to use the bathroom, you would be fine with using any bathroom she choses?" Matt Lauer asks. "That is correct," Donald Trump said.

That dig at Ted could be in response to this recent interview with Glenn Beck: "The idea that grown men would be allowed alone in a bathroom with little girls — you don’t need to be a behavioral psychiatrist to realize bad things can happen."

Or this maybe it was in response to this: "If Donald Trump dresses up as Hillary Clinton, he still can’t go to the girls' bathroom," Cruz said at a rally.

Regardless, it appears Cruz has lost some of the goodwill of one of his most famous and vocal supporters.

This video includes clips from PBS NewsHour and images from Getty Images.