Burning Man Has Some Radical Competition 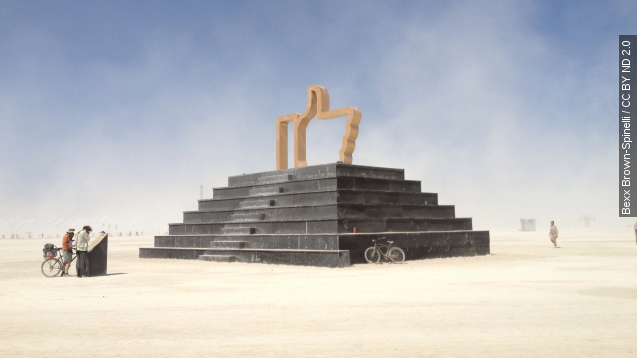 Things can get pretty ... interesting. (Video via ServusTV / 'TM Wissen')

For the thousands of Burners who trek out to the Black Rock Desert every year, it's an entire culture. (Video via YouTube / Jason Phipps)

Guiding that culture are 10 principles that ensure the whole experience is communal, radical, clean and non-commercial. (Video via Austin Hou / CC BY 3.0)

While Burning Man really is a one-of-a-kind, temporary event, there are communities full of similarly minded radical folk across the globe.

This ecovillage in northern Scotland is all about working with nature, sustainability, inner-spiritual attunement and a peaceful communal lifestyle. You know, hippie stuff. Don't worry: They call themselves hippies. (Video via Findhorn Foundation)

Visitors are welcome. Folks wanting to stay longer — say, a year or so — can pay to enroll in programs that'll integrate them into the spiritual community. (Video via YouTube / CSworkz)

If you're looking for a spiritual community in northern Italy, there's the Federation of Damanhur. It's a little more ... robust, than its Scottish peer.

Those seriously considering to start a new life in Damanhur have to enroll in the aptly named "New Life" program, which lasts three months.

For the most part, the government tolerates Christiania, though the two sides have butted heads over just how autonomous the neighborhood is.

While Christiania has its own spiritual happenings, the commune is more famous for its dealings in the drug trade — specifically, marijuana. Hard drugs aren't allowed. (Video via YouTube / Kathrynne Johnson)

Right, so, moving on from autonomous neighborhoods, there are autonomous micronations, like the Principality of Sealand.

Essentially, it’s an old offshore platform near the coast of the United Kingdom. Originally named HM Fort Roughs, it had previously been used by the U.K. during World War II. (Video via BBC)

While not an actual nation, Sealand has all the markings of a nation aside from, well, a sizeable population. However, folks can purchase Sealander nobility titles for about $300.

And finally, coming back to the States, we have another experimental community — Arcosanti.

It’s about 70 miles north of Phoenix in central Arizona and emphasizes something called archology — or a combination of architecture and ecology. (Video via YouTube / SHOT BY RYAN)

That pretty much means it has a lot of interesting-looking and environmentally friendly buildings. (Video via Wanderfoot)

Acrosanti is a work in progress, but that doesn't mean you can't move in — just complete a five-week workshop, which costs about $1,500. You can then apply to volunteer in the community.