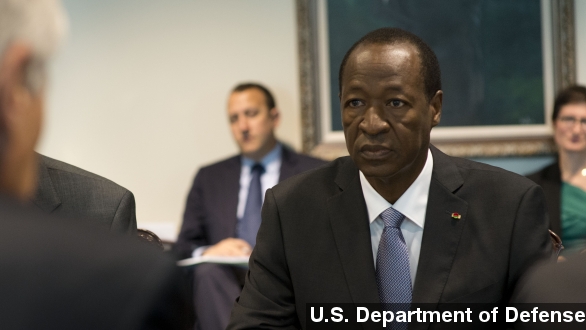 SMS
Burkina Faso's President Has Resigned; What's Next?
By Jake Godin
By Jake Godin
November 1, 2014
With the resignation of Burkina Faso's president amid protests, the country faces a hazy future in foreign relations and influence on other nations.
SHOW TRANSCRIPT

After failing to extend his rule to a fifth term, President Blaise Compaore of Burkima Faso stepped down amid violent protests Friday, ending one of Africa's longest presidencies.

The protests which forced Compaore out came to a head Thursday when demonstrators set fire to the parliament building after Compaore attempted to change the constitution to allow him to serve another 5-year term. (Video via BBC)

Compaore was serving his 27th consecutive year as president, a term which started in the 1987 coup which killed Thomas Sankara, a man known as "Africa's Che Guevara." (Video via Institut national de l'audiovisuel)

Since then, Compaore has been blamed for taking on dual roles in the region, both feeding conflicts in some parts and working to increase stability in others.

Soon after his resignation, Gen. Honore Traore said he would take over. The move contradicted Article 43 in the country's constitution, which stipulates that the president of the Senate take over. (Video via eNCA News)

But not even 24 hours later, a new leader emerged as France 24 reported Saturday that Col. Isaac Zida announced it would be him who would lead the transitional government.

Gen. Traore has so far been quiet on Col. Zida's announcement and now many are watching the West African nation closely to see what happens next.

The fate of the country is especially important for the U.S. seeing as how, according to ABC, the country serves a key counterterrorism staging point for fighting Al Qaeda in the Islamic Maghreb to the north and west in Mali and Boko Haram in Nigeria to the east.

And Press TV says France, which used to be Burkina Faso's colonial overlord, will also be paying close attention since they too have considerable counterterrorism resources located in the country.

Ken Opalo at Foreign Policy notes it's not only Western leaders that will be taking notice of Burkina Faso's revolution. Other African nations with long-serving presidents will also be looking to see what happens next.

These countries include Angola, Burundi, Republic of the Congo, the Democratic Republic of Congo, Liberia, Sierra Leone and Rwanda. Out of these, Opalo says only the presidents of Liberia and Sierra Leone have said they'd step down.

Even still, both Opalo and a former U.S. ambassador to Zimbabwe interviewed by The New York Times say they are doubtful a full blown "Sub-Saharan African Spring" would actually happen.

The ousted president Compaore fled to Ivory Coast's capital shortly after his resignation. According to Burkina Faso's constitution, the election of a new president is due to take place in 60 to 90 days.

This video includes images from Getty Images and an image from the U.S. Department of Defense.