Building Collapse During Heavy Rains Kills At Least 7 In Kenya 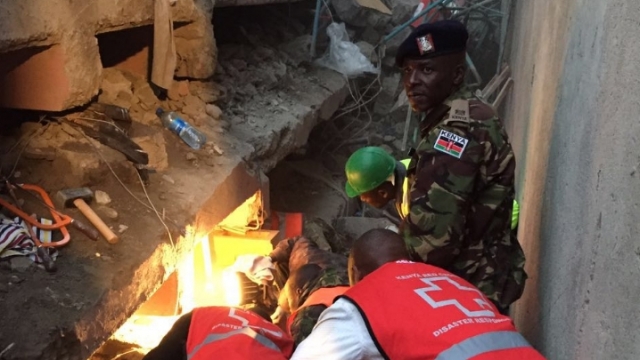 SMS
Building Collapse During Heavy Rains Kills At Least 7 In Kenya
By Ben Lawson
By Ben Lawson
April 30, 2016
Over 120 people, including a child, have been rescued from the collapsed building, which an official warned was too close to a river.
SHOW TRANSCRIPT

At least seven people are dead after a six-story building collapsed in Nairobi, Kenya.

Videos from the scene show rescuers frantically digging through rubble to reach those still trapped inside and, in one case, rescue a baby.

Reports indicate more than 120 people have been pulled from the debris, and officials are hopeful more will be rescued.

Officials still haven't said what caused the collapse, but it came in the middle of heavy rainfall and flooding. The county's deputy governor insisted officials never approved the construction of the building and said it's "too close to a river, and there is no way the county could approve it."

Flooding, crowds of people and narrow streets reportedly kept firefighters from quickly getting to the scene, which the Red Cross described as "chaotic."

Police say at least 14 people have died in the flooding, including those from the building collapse. Kenya's Red Cross says more than 1,000 homes were affected by rising waters.

This video includes clips from Kenya Citizen TV and KTN and an image from Twitter / @KenyaRedCross.