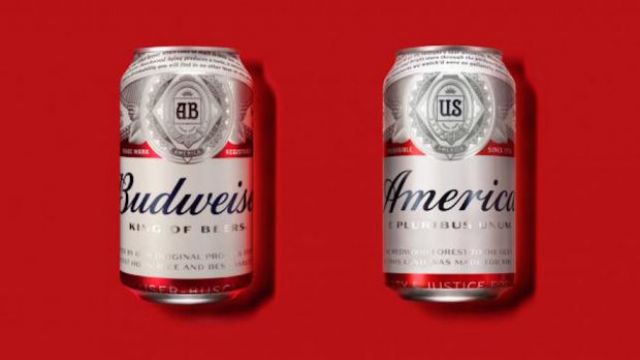 SMS
Budweiser Is Changing Its Name To 'America' Because Of Course It Is
By Ryan Biek
By Ryan Biek
May 10, 2016
Budweiser cans will sport the new branding until the presidential election.
SHOW TRANSCRIPT

Soon, Budweiser won't be Budweiser. Until the presidential election in November, the beer company is changing the name on its cans to "America."

While the design is largely staying the same, pretty much every reference to the company's real name is being substituted with the overtly patriotic moniker. Even a banner that used to describe the brewing process will now simply be lyrics from "The Star-Spangled Banner."

Dare we say we're not surprised?

Budweiser has been making patriotism the theme of its summer cans for a while now. The "America" marketing ploy is no throw-away, though. From a sales standpoint, summer is the most important season.

But here's the best part: Even though Budweiser is made in the U.S., it's actually owned by a Belgian-Brazilian conglomerate. We're guessing three national anthems are a little harder to fit on the can.

This video includes clips and images from Anheuser-Busch InBev.