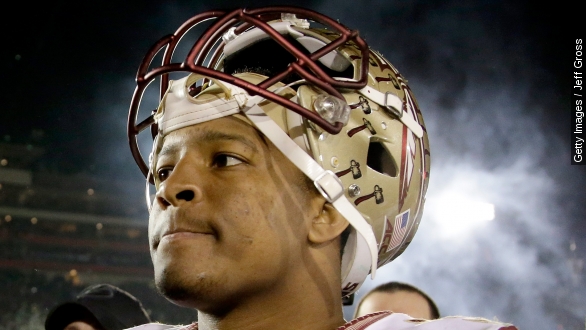 SMS
Bucs QB Jameis Winston Files Countersuit Against Accuser
By Cliff Judy
By Cliff Judy
May 9, 2015
Winston's attorneys say the woman who sued the quarterback last month and accused him of raping her has maliciously damaged his reputation.
SHOW TRANSCRIPT

Jameis Winston, the former Florida State star and the NFL's top overall draft pick, has filed a countersuit against the woman who accused him of rape.

Winston's attorneys filed the case Friday as a response to the woman's lawsuit against Winston last month.

The countersuit says the woman's continued accusations and lawsuit are malicious. Besides damaging his reputation, Winston's lawyers argue the quarterback has lost large endorsement deals. (Video via WFLA)

Winston was arguably the most dynamic player to come out of college football this year, and he's already one of the more controversial players in the NFL before he's even taken a snap. (Video via Sports Talk Florida)

A freshman from Florida State accused Winston of raping her in December 2012, allegations that never led to charges. Winston says the sex was consensual.

But in a highly critical piece published about a year-and-a-half after the woman first accused Winston, The New York Times called the police investigation flawed. It noted, among other things, police didn't follow obvious leads and the lead detective waited two months to file his first report on the case.

The Tampa Bay Times obtained a copy of the lawsuit, reporting Winston is seeking damages in excess of $75,000 and that he brought the suit, "out of necessity, not malice or ill will."