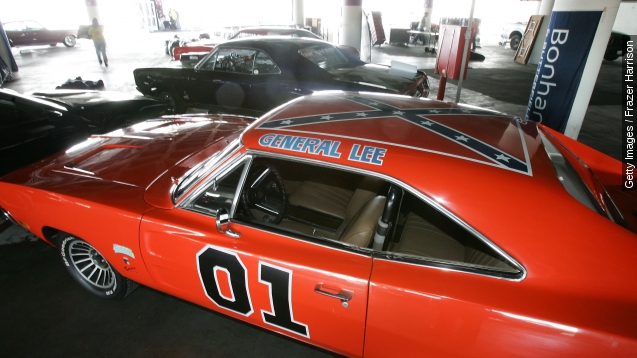 General Lee, the famous "The Dukes of Hazzard" car, arguably became a symbol of the South –– but now it's losing one of its distinctly Southern attributes.

Professional golfer Bubba Watson announced via Twitter on Thursday that he plans to paint over the car's Confederate flag, and replace it with an American one.

He tweeted, "All men ARE created equal, I believe that so I will be painting the American flag over the roof of the General Lee #USA." Watson reportedly bought the car at auction in 2012 for $110,000.

His decision has received mixed reactions. One tweet said, "Saddened to hear @bubbawatson is going to paint over the confederate flag on the general lee. You should sell it before you ruin it." Several people have also written some variation on the car "won't be General Lee anymore."

Although many other replicas were used on the show known for its exciting car stunts, Watson's Lee is special because it was the one used in the iconic opening credits of the show with the Duke brothers jumping over a police car. (Video via CBS / 'The Dukes of Hazzard')

But other cars from the show are possibly being affected by the recent Confederate flag controversy as well.

Fox News reports John Schneider, the actor who played Bo Duke, wasn't able to sell his own General Lee at auction. It's possible the Confederate flag had something to do with it, although a spokeswoman for the auction house said interest in the vehicle hadn't changed during the weeks leading up to the auction.

TV Land decided to pull reruns of the show because of the flag. Schneider told The Hollywood Reporter, “The Dukes of Hazzard was and is no more a show seated in racism than Breaking Bad was a show seated in reality."

Watson's decision might have more to do with recent headlines than his personal taste.

The Pensacola News Journal reports immediately after buying the car in 2012, Watson tweeted, "Sorry to all that are offended by my car 'General Lee 1' but car is #Awesome."

This video includes images from Getty Images and Humanoide / CC BY NC 2.0.