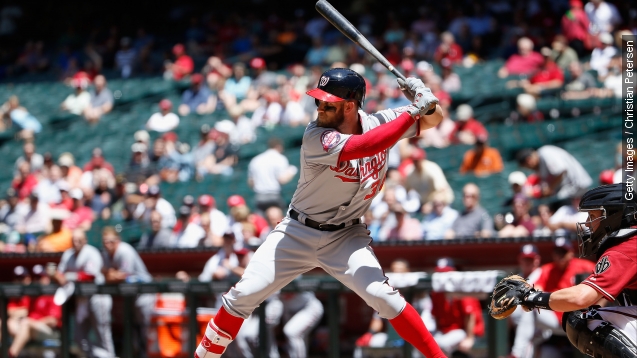 SMS
Bryce Harper, Season 4: The Year That Defines MLB Greats
By Jay Strubberg
By Jay Strubberg
May 18, 2015
For major leaguers, the fourth season seems to be a pivotal year, and the stats say 2015 could be the breakout season for the Nationals' Bryce Harper.
SHOW TRANSCRIPT

Good things come to those who wait — a fitting maxim for the Washington Nationals when it comes to Bryce Harper.

The 22-year-old outfielder is tearing the cover off the ball lately.

Entering Monday, he's blasted nine home runs in his last 11 games, which is even more impressive considering his age.

As Fox Sports points out, "Only the great Joe DiMaggio achieved that feat at a younger age. It took Harper just 39 games to surpass his home run total from all of last season."

As of Monday, Harper led the major leagues in multiple offensive categories. If he stays even remotely near this pace, he'll surely be the favorite to win the NL MVP. (Video via Gatorade)

"I know everyone looks at this and says, 'Look, this is just a really hot streak for Harper.' But, I think we're past that point though. I think we have to say, 'This is who he is.' ... He has developed into one of the best overall hitters in baseball," CSNWashington.com Nats Insider Mark Zuckerman said.

Baseball fans have been waiting with bated breath for Harper to finally have an explosive season ever since he was selected No. 1 overall in the 2010 MLB draft. There's just been so much hype around him. Though, even with the lukewarm numbers he had prior to this season, Harper's career thus far actually stacks up pretty well against other outfielders picked first in the draft.

For instance, take the 2003 No. 1 overall selection Delmon Young. It took Young until his fourth full season in the bigs to climb above 20 HRs and 100 RBIs in a single season, and he's kind of fizzled out since then.

A very similar comparison can be made for outfielder Darin Erstad, who went No. 1 in '95.

Let's go back even further, though. Iconic Mets outfielder Darryl Strawberry, the No. 1 pick in 1980, posted strong numbers his first four seasons but nothing earth-shattering.

During that period, he hit more than 25 home runs each season, but his batting average rose above .270 just once before he finally broke out in 1987 with 39 bombs, hitting .284.

You could even argue, albeit very carefully, one of the greatest left-handed sluggers of all-time, Ken Griffey Jr., didn't truly break out until his fourth season.

"The Kid" hit fewer than 23 home runs in each of first three seasons before his maddening home run power truly began to take off.

If anything, Harper's recent surge will likely quiet his critics, at least until he cools off. In an ESPN poll before the start of this season, 41 percent of respondents said he was the most overrated player in baseball. (Video via Under Armour)